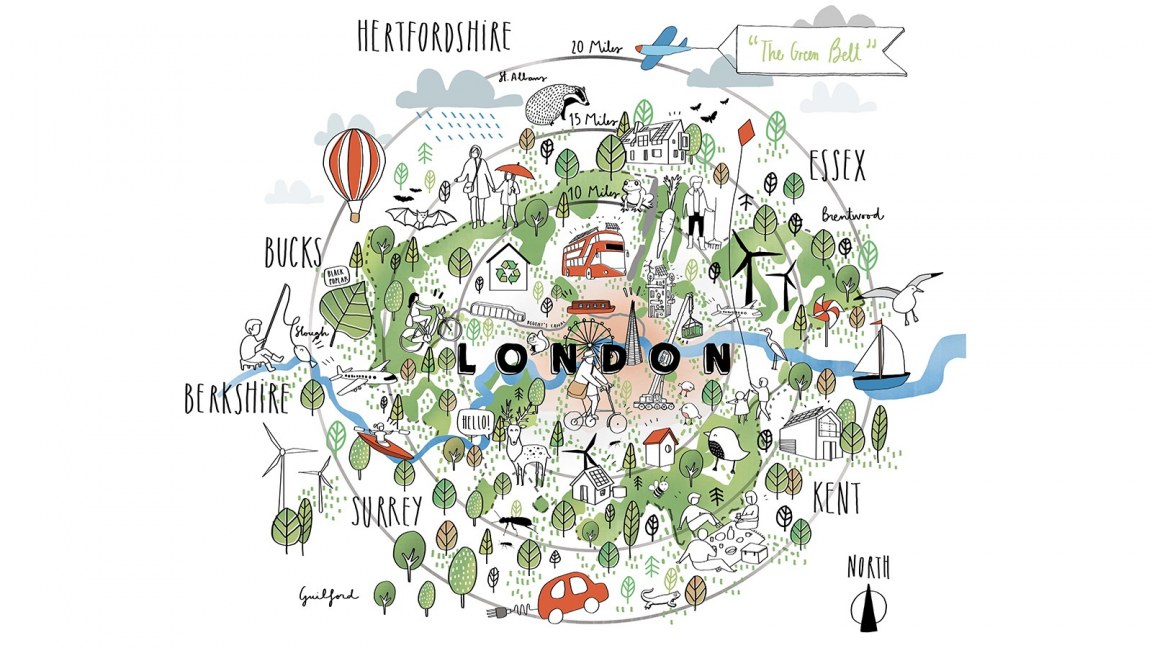 Over 200 members of the London Society gathered at the Jarvis Hall in Portland Place to hear Ben Derbyshire, President of the RIBA, talk about ways to deal with London’s housing crisis, and the challenges faced by architects and planners. Barry Coidan reports.

Building Greater London – or how do you make our city better when nobody wants new neighbours?
In setting the scene Ben painted a less than rosy picture of London’s housing. We have a broken housing market. The supply of new homes is well short of the target of 66k a year set by the Mayor of London. Rent takes up far too much of people’s take home pay – averaging around 57% with “Buy to Let” landlords unwittingly exploiting those who can’t afford to buy.

You could characterise London as a divided city. Divided over new developments with opposition to almost any – the haves excluding the have nots. Yet there’s space to build. London’s housing density compared with other major capital cities is much lower: outer London boroughs average 16 dwellings per hectare. London is also aging, in terms of its population and major infrastructure.

The capital has so much going for it! It is creative, it is sharing, energetic and productive. Ben’s manifesto “Let the People Build” drew on this energy and creativity to show how London could accommodate its growing population in a humane and invigorating environment.

Ben talked about “superdensity” of 350 dwelling per hectare as achievable providing a comfortable environment – mid-rise, integrating towers with street based typology to promote street life and build on London’s tradition of mixed communities. There needs to be a wider range of housing typologies, we should harness space above public buildings and design for management, thereby making service charges affordable for all and develop new funding streams for long term management. Where new development is proposed, nothing should be ruled out, including doing nothing. The community needs to be engaged and, yes, balloted! We need policy and process which sustain outcomes, aiming for markedly mixed neighbourhoods.

“Right to Buy” should be scrapped. I thought I heard a collective “Hear, hear” when that was mentioned.

If planning approvals went at the pace of Ben’s talk, our problems would be solved. Take London town centres – they are unique and provide a great opportunity to deliver mixed use housing intensification along with accessibility and connectivity. Revitalising the High Street. Norwood Junction development near transport links would provide high density homes in a conservation area.

We left Norwood and headed for London’s Green Belt. We at the London Society can claim to have called for “A Green Mantle” in the 1920’s – more like a corset keeping in London’s sprawling masses from spoiling the Home Counties. It’s not a modest piece of green real estate as it extends out 35 miles and covers 516,000 hectares. It’s not always green or tidy with much of it inaccessible to those meant to benefit from it.

Could we live in the Green Belt? Certainly was Ben’s view. It can be energy positive, generate biodiversity, be fully recyclable supported by local sustainable economies. Such development would require a fraction of those 500k plus hectares.

And what about a strategic approach to planning? In 2000 the South East Regional Planning Conference (SERPLAN) an attempt to deal strategically with the “London Problem” and its impact on the South East of England was scrapped. Out went a duty of local authorities to cooperate, out went coterminous economic and political boundaries. In came nimbyism as Home Counties local authorities made it clear they weren’t going to home Londoners on their green and pleasant lands.

But who is going to build all these houses. Not the current house builders if the customer is given the choice, since most people don’t want to buy a ‘new build’ home.

But don’t put all the blame on the house builder: it is the market which is broken. House building firms operate in a monoculture, and they build what they can get away with. We all need to demand high quality, mixed developments which are highly diversified. If demanded the builders will build!

The RIBA publication “Ten Characteristics of places where people want to live.” stressed that planning is an active verb. It is not about stopping building, damping innovation or creativity. It is the design of the built environment. “Beautiful by design” is not some throwaway slogan – it should translate into real places. Ben proudly showed pictures of Hanham Hall. Built within the Green Belt, it is zero carbon, biodiverse with allotments and greenhouses.

What about a Urbaceous Border: you don’t need green fingers but it might help. A street based, linear city a hundred miles long, 200 metres wide and 4 storeys high, wrapped around London. This vision would provide 2 million homes, factories and schools all connected by a super duper fast monorail….and preserving the Green Belt. When can I move in?


Air rights are the property interest in the “space” above the earth’s surface. Generally speaking, owning, or renting, land or a building includes the right to use and develop the space above the land without interference by others. This is redefining upward development and the Government is interested, with a consultation document out seeking views on the use of potential valuable living space above the roof. As in all things – good quality design and build is essential otherwise it’ll be a mess. The London company Apex AirSpace is building in the air. In the London Borough of London there are 475 potential roof spaces providing 2,485 new homes, which is 28% of Camden’s housing target. Given the political will, the right regulations and finance, building on top of existing suitable properties this could provide 180k new homes across the capital – nearly half of London’s 2015 housing target.

I’m not sure what John Betjeman would have to say about Ben’s “Supurbia”. A veritable transformation of suburbia by using the sites around the 173 stations in Metroland which were deliberately build away from town centres. Making use of overlooked small sites and developing creatively those large suburban gardens in the post war typology of ample semi- detached homes, can provide homes for Londoners.

At this point Ben became a numbers machine – it was highly impressive. There are 5 -10 hectares around each of these Metroland stations – average density 22-25 dwelling per hectares. In these places we can comfortably build to density of 100-160 dw/ha. With an average net increase around the stations of 500 dwellings, we would have a net increase in outer London boroughs between 43,000 and 86,500 homes. Then there’s Suburban intensification within 1 kilometre of existing urbanised stations which could furnish an additional 250,000 dwellings. This would be achieved by encouraging home owners to sell off part of their large gardens as plots for development. Using “Plot Passports” and generating up to £200k per plot. Along with ad hoc uptake delivering another 500,000 dwellings across London – you’re well on the way to providing housing for all who need it.

Such development also is an opportunity to “de-car” suburbia. Ben showed us pictures of residential areas without cars – residents’ cars relegated to a designated car park or cars banned. People got used to it and appreciated the lack of rusting metal cluttering up the streetscape. Then there’s the opportunity to get rid of the car completely to be replaced by smart infrastructure.

Ah prefabs – I remember with some fondness the old asbestos post war prefab homes erected on bomb sites in Portslade by the Sea. Well they’re coming back in a 21st century guise. Prefabricated homes is a rapidly growing sector. These easily assembled units are appropriate for delivering large developments by local authorities and housing associations.

Such images! It was a bit of a shame that Ben finished on a less than upbeat note. London should have a Housing Expo which will highlight new ways of delivering housing for all London, by using the creativity of the city, its SMEs and design firms along with the big builders. This idea launched by RIBA and the Design Museum was to put London at the forefront of new thinking on housing. The three stage project would culminate in a permanent exhibition in 2021/22. But it was not to be. Ben asked why, if it works elsewhere, why not in London?

After Ben’s well received talk there were loads of questions.

Question: How would you take the Supurbia idea forward? Answer: with a pilot study of one or two stations.

Question: People know what they want but how can that be delivered? Answer: the current regime is very unsatisfactory – it’s not designed to deliver quality. It’s speculation and avarice that drives our planning regime.

Question: My parents married in 1941 could only buy a house in 1963 why should young people today expect to have their own home earlier? Answer: We’d just been through a major war, the country was on its knees economically. It’s depressing to think that when we have a booming economy we’re managing to replicate th