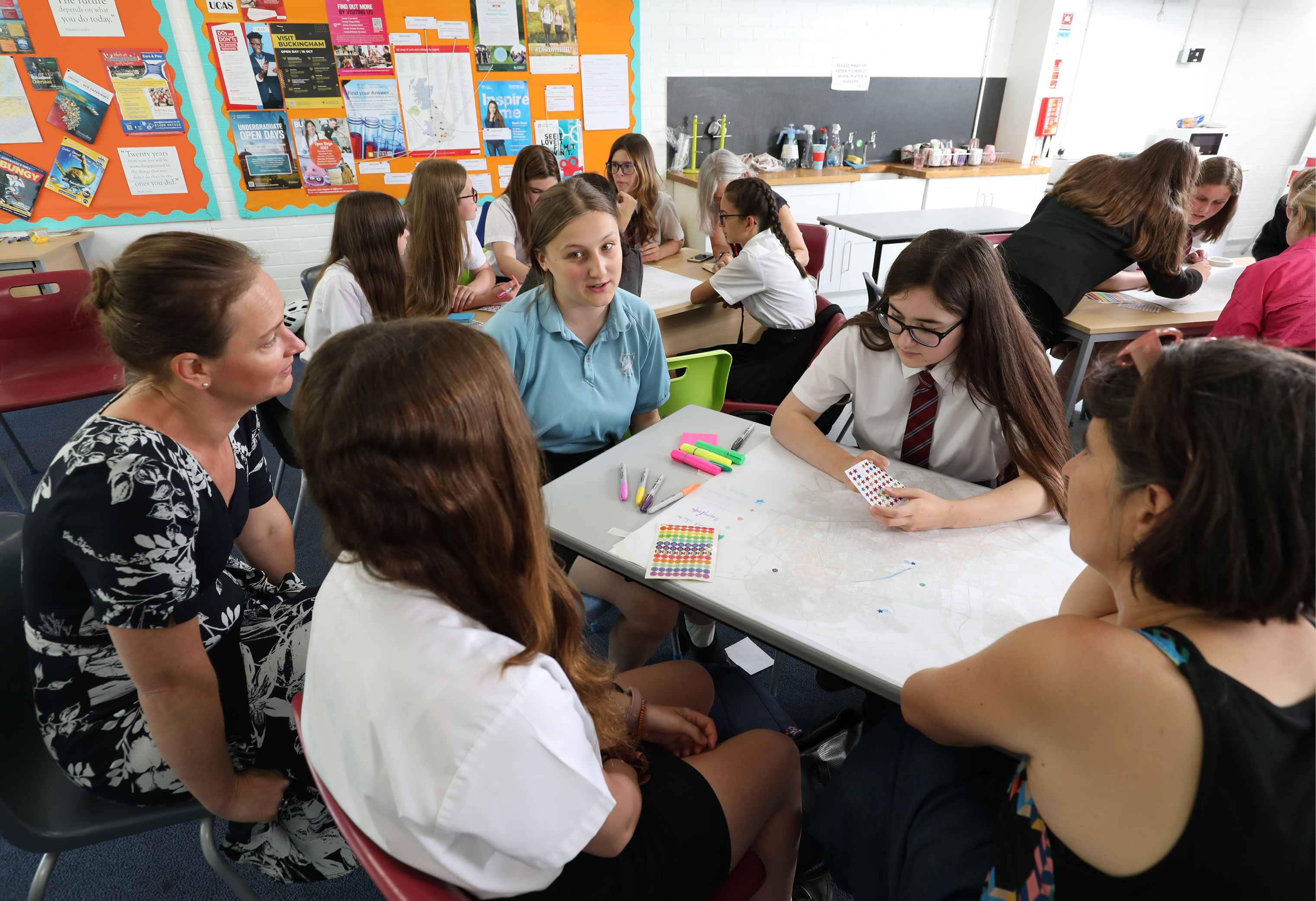 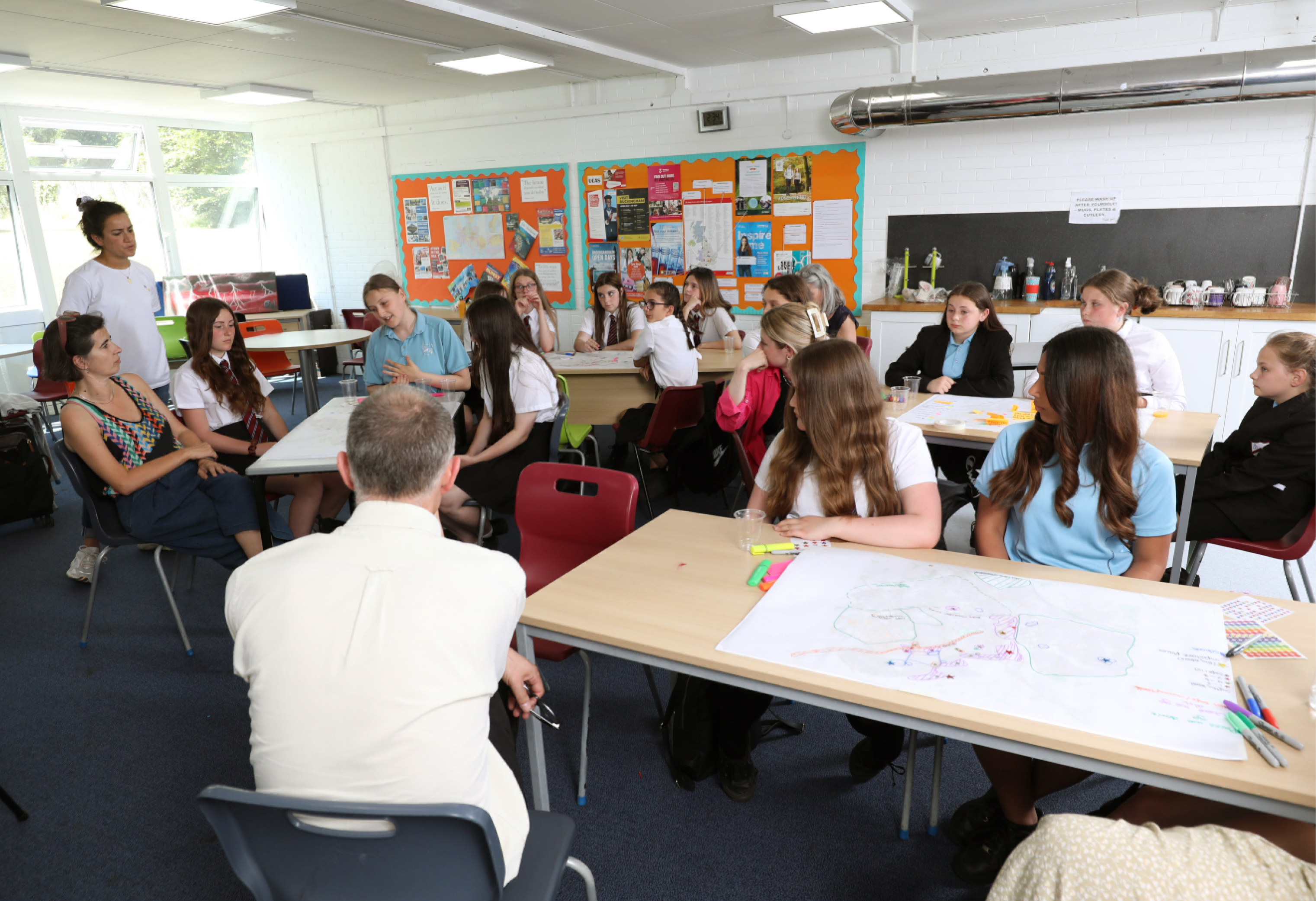 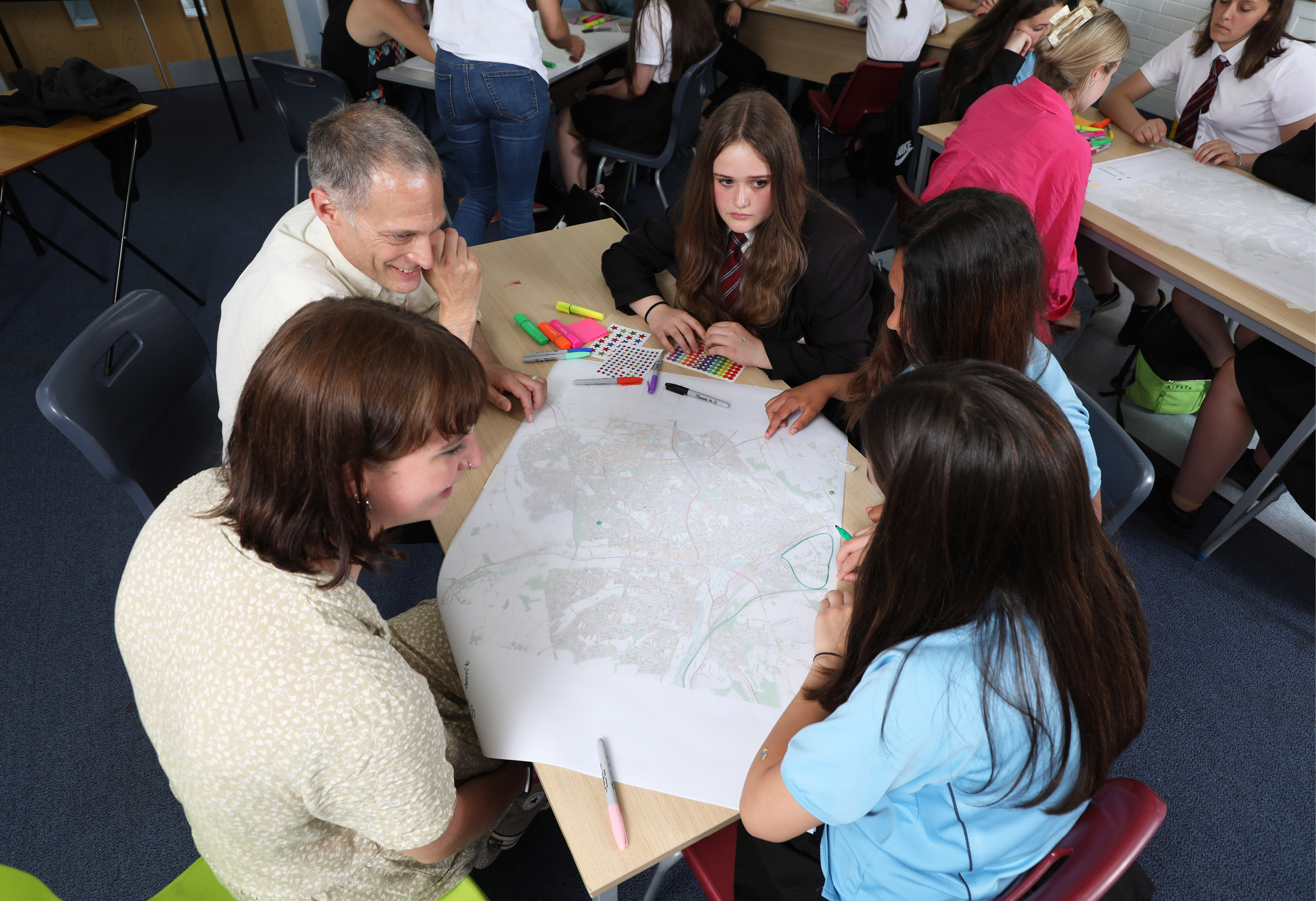 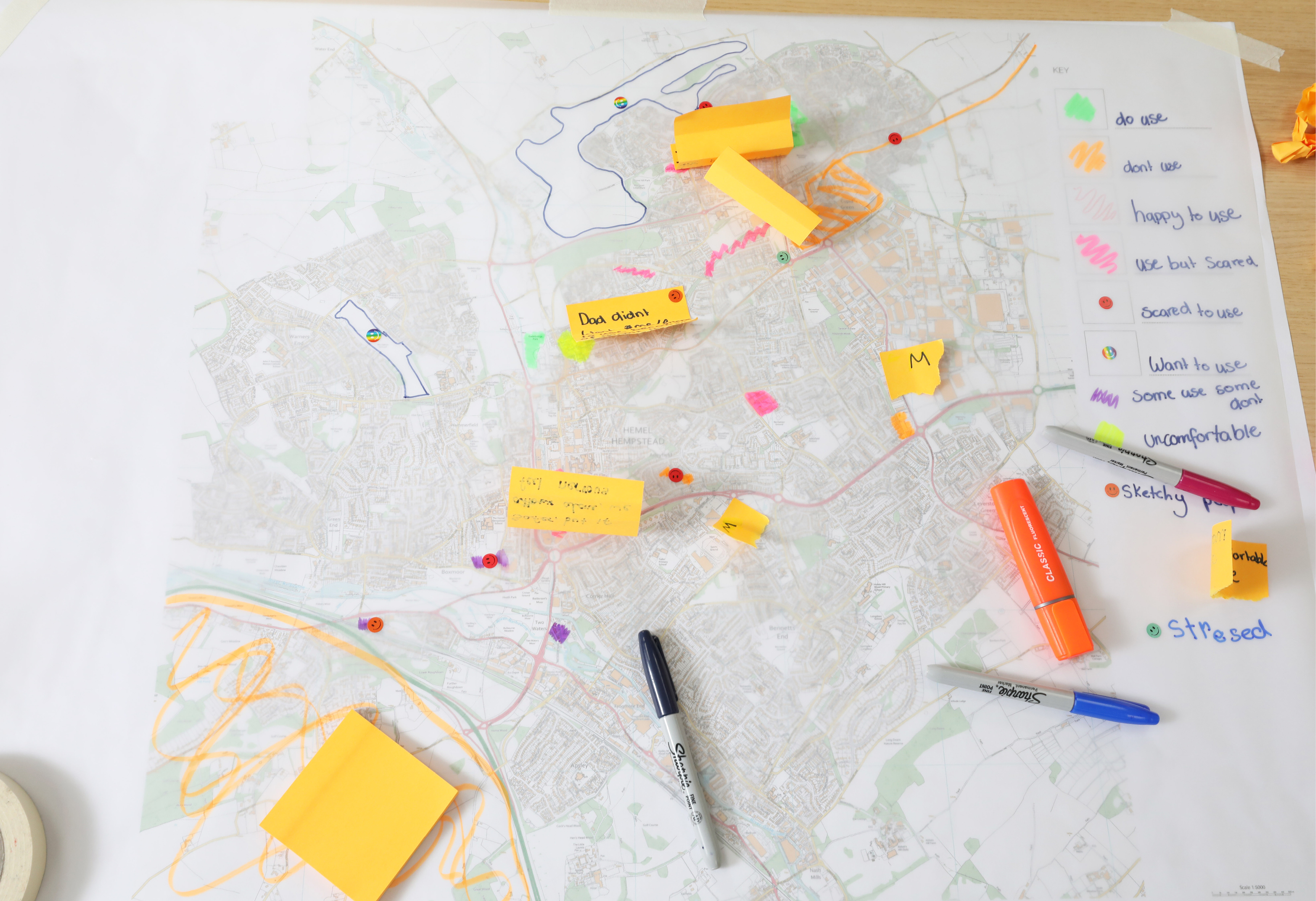 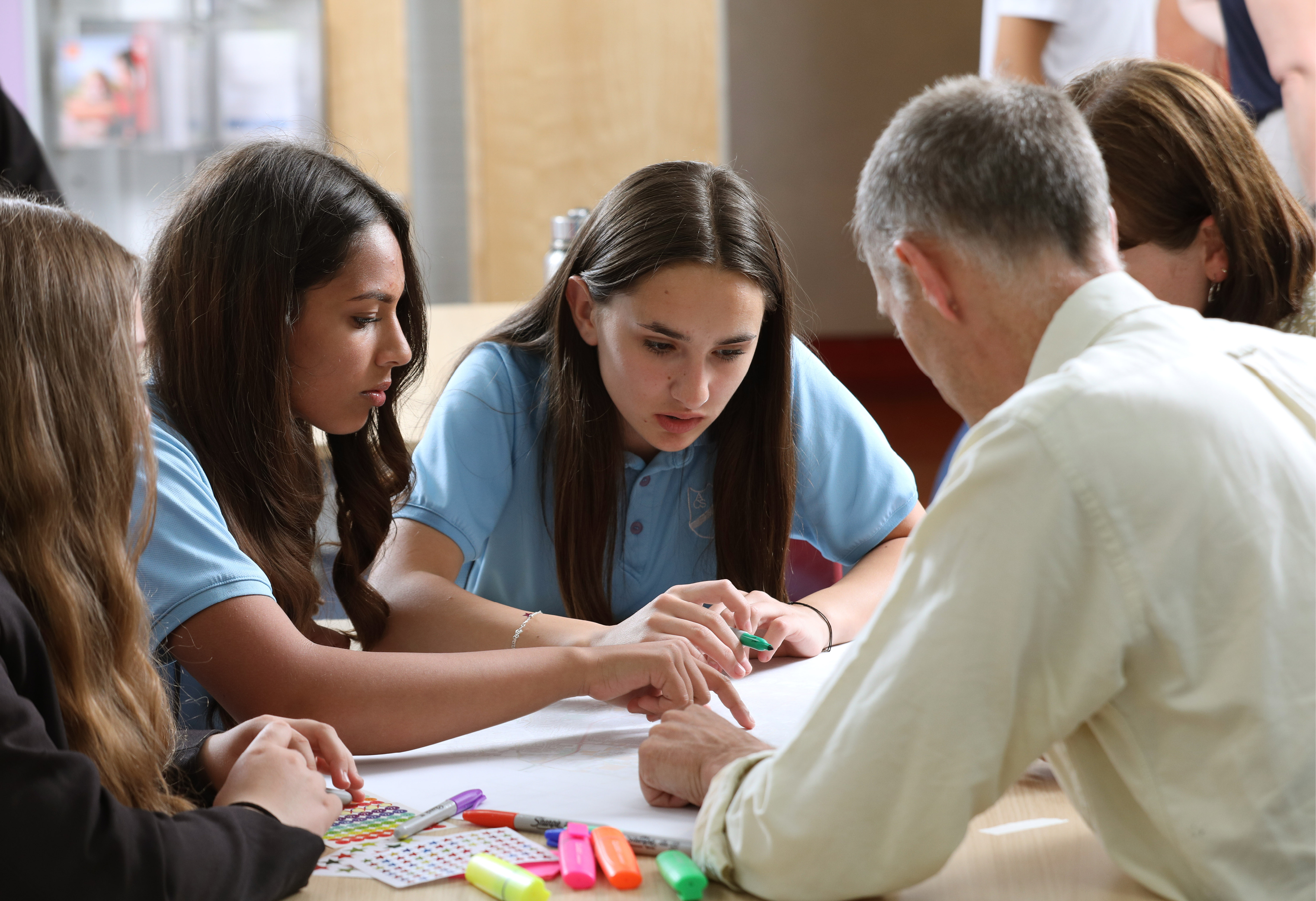 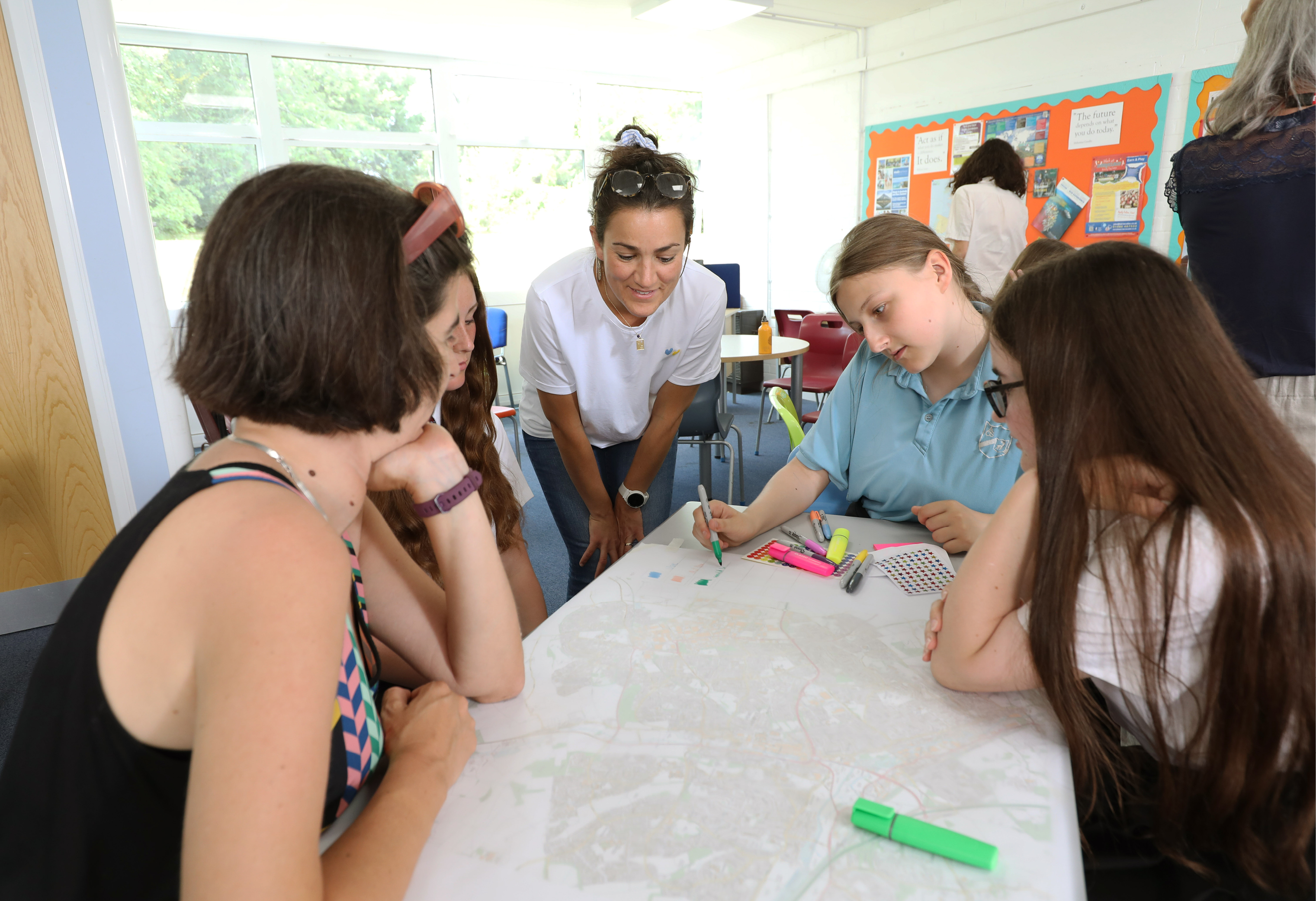 Countryside Partnerships has joined forces with the London School of Economics and Political Science (LSE) and Make Space for Girls, a charity which campaigns for parks and public spaces to be more welcoming to teenage girls, to develop an industry-leading approach to inclusive design in public spaces for young people.

An extensive four-day consultation process with 16 Y9 girls at the Astley Cooper school in Hemel Hempstead, took place last week, following a Countryside-commissioned report carried out by Dr Julia King, a Research Fellow at LSE Cities and a design practitioner, and Make Space for Girls. The report reveals that our parks and public spaces are dominated by teenage boys and that consultation with women and teenage girls is critical to inform the inclusive design of public spaces.

Dr Julia King and Make Space for Girls’ bespoke piece of research investigates how the design of public spaces impacts their use, incorporating factors such as gender, demographics and deprivation indices. Dr King also utilises high-profile examples of inclusively designed public spaces from across the world to inform the case for inclusive public spaces in the UK.

The research findings have set the scene for Countryside, LSE Research Fellow Dr King, Make Space for Girls and HTA Design to commence the consultation process with young people residing in the surrounding area of Spencer’s Park in St Albans, the pilot scheme being used for this initiative. Countryside will be drawing on Make Space for Girls’ experience in research and campaigning to ensure that the voices of girls and young women are a key component in the planning, consultation, and design process for the public spaces at Spencer’s Park

Phase 2 of Spencer’s Park is a 600-home scheme being delivered by Countryside in partnership with Homes England, and HTA Design. The scheme also includes a new primary school, shops, commercial space, and open spaces.

“This report has made it clear that the consultations we are undertaking with Y9 girls at a school in close proximity to Spencer’s Park is critical for us to understand what teenage girls want from public spaces, so that we can incorporate their feedback into the design and delivery of the new public realm at Spencer’s Park. Improving gender parity in public spaces is challenging, but better spaces, created with teenage girls and women in mind, have the potential to radically shift the balance.”

Pippa Humphries, Architectural Assistant, at HTA Design LLP tells us her experience and the impact working on this project has meant for her:

“My thesis year was all about exploring hidden dynamics within cities and dissecting how they can lead to spatial marginalisation, and what we as designers can do to ensure urban development’s grow into supportive, inclusive and safe spaces for all. A lot of my research surrounded non-linear techniques that could be employed by architects in order to break down and translate space and spatial design to non-designers, and provide them with the tools and equipment to articulate what it is they would need from the public realm to feel less marginalised, isolated or uncomfortable in space. Working with the teenage girls at Astley Cooper has been essentially putting that work to the test. It’s been a very inspiring week for us as architectural designers, and hearing the girls report how they feel ‘ judged’ or ‘watched’ or unable to do what they want, wearing what they want for fear of their safety really solidifies how not much has changed since I was a teenage girl and also identifies the relevance and urgency of a societal shift towards inclusion for young women in space – as the issue won’t go away until it is addressed and teenage girls voices are solidified in the built environment!

The girls were very enthusiastic after our model making workshop & careers talk about the notion that they could be our next generation of built environment professionals. At the end of the sessions around 1/3 of the girls raised their hands that they would be interested in pursuing a career in architecture, and every single pupil had an impressive flair for design, creativity and activism. I’m excited for the next step of this process, which will be consolidating the girls ideas and requirements into the landscape design of the Spencer’s Park masterplan.”

“Investing in change through strategic partnerships is a core element of our approach, going beyond building houses to engage meaningfully with the communities in which we work so that we can really think critically about the way we design the social and digital infrastructure, and the transport and green spaces to answer local needs.

“Our partnership with the LSE and Make Space for Girls, both unrivalled in their fields of expertise, is a hugely exciting step forward for inclusive design in youth spaces and something we hope can be used as a benchmark for the development sector, as well as replicated in Countryside’s future schemes.”

Dr Julia King, Research fellow at LSE Cities added: “There is a democratic deficit of young voices in planning and development and as the future generation, they will be the most impacted by change and public space provision.

“Working with Countryside, Make Space for Girls, and HTA, this is a great opportunity to explore new methodologies of engagement to understand and imagine the future of new public spaces in the Spencer’s Park development in Hemel Hempstead.

“Through this partnership we hope to build on models of social research that can empower people to affect positive change by participating in the design and making of their own communities.”

“We are excited about working with Countryside and Dr King on this innovative project. It’s really important that the voices of teenage girls are heard in consultations so that their needs are included in designs.

“We know from work done elsewhere that when public spaces are designed to be inclusive many other groups benefit from the changes - including old people, mothers, and teenage boys as well.

“In Sweden a study showed that conventional teenage activity spaces were used 80% by boys, 20% by girls. But when one was designed by girls aged 16-24 the space they created was used much more evenly: the boys weren’t excluded; the big change was that girls were welcomed in.”

“This initiative is transforming the way in which our female students look at public spaces. This opportunity to empower young women and promote engagement in local democracy has significantly enriched the curriculum we offer at Astley Cooper school. Our girls are developing their communication, planning and organisation skills while learning about the process of designing and delivering a building and public places. The partnership has been a fantastic learning curve which we hope to develop further in the future through our careers curriculum.”