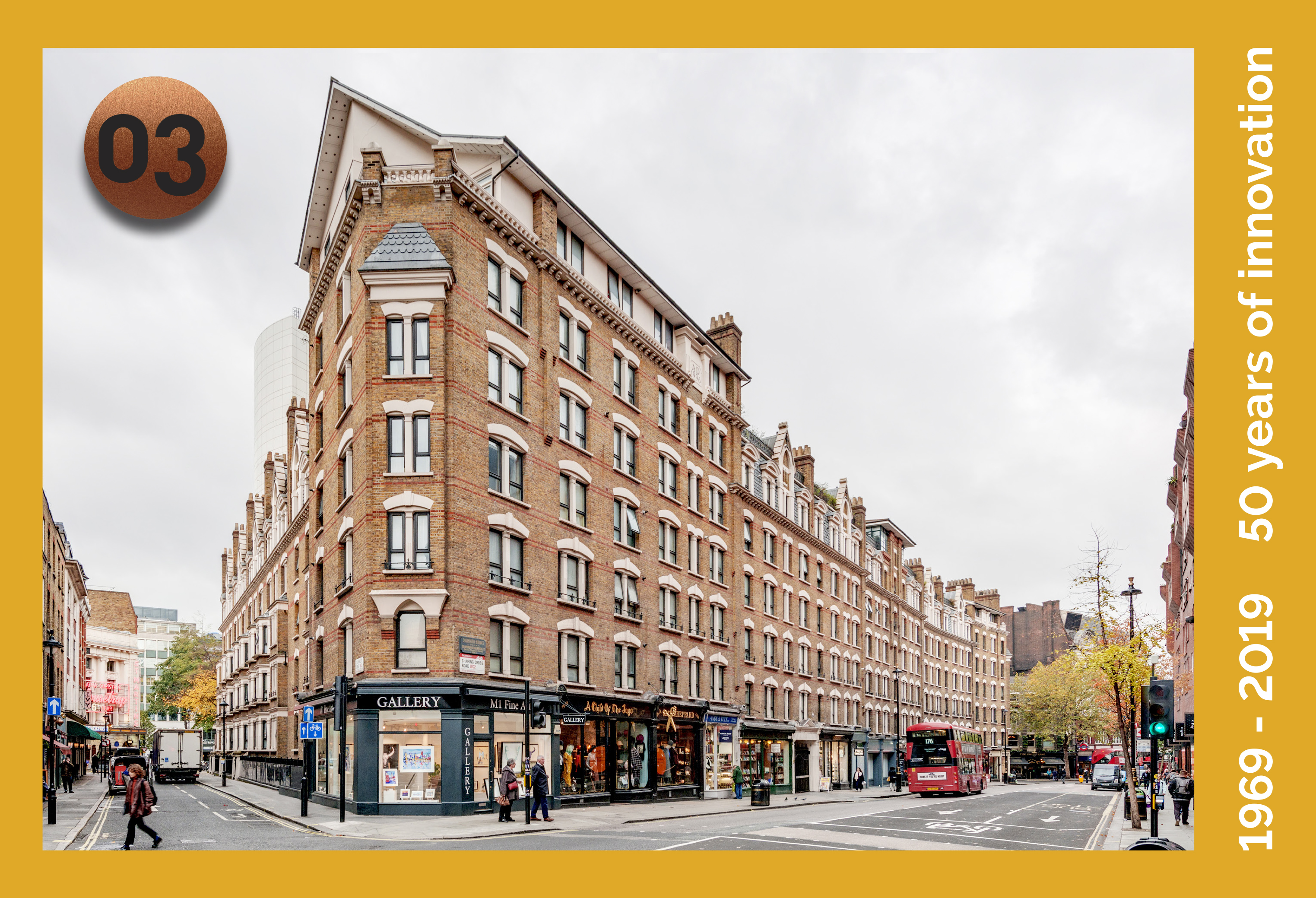 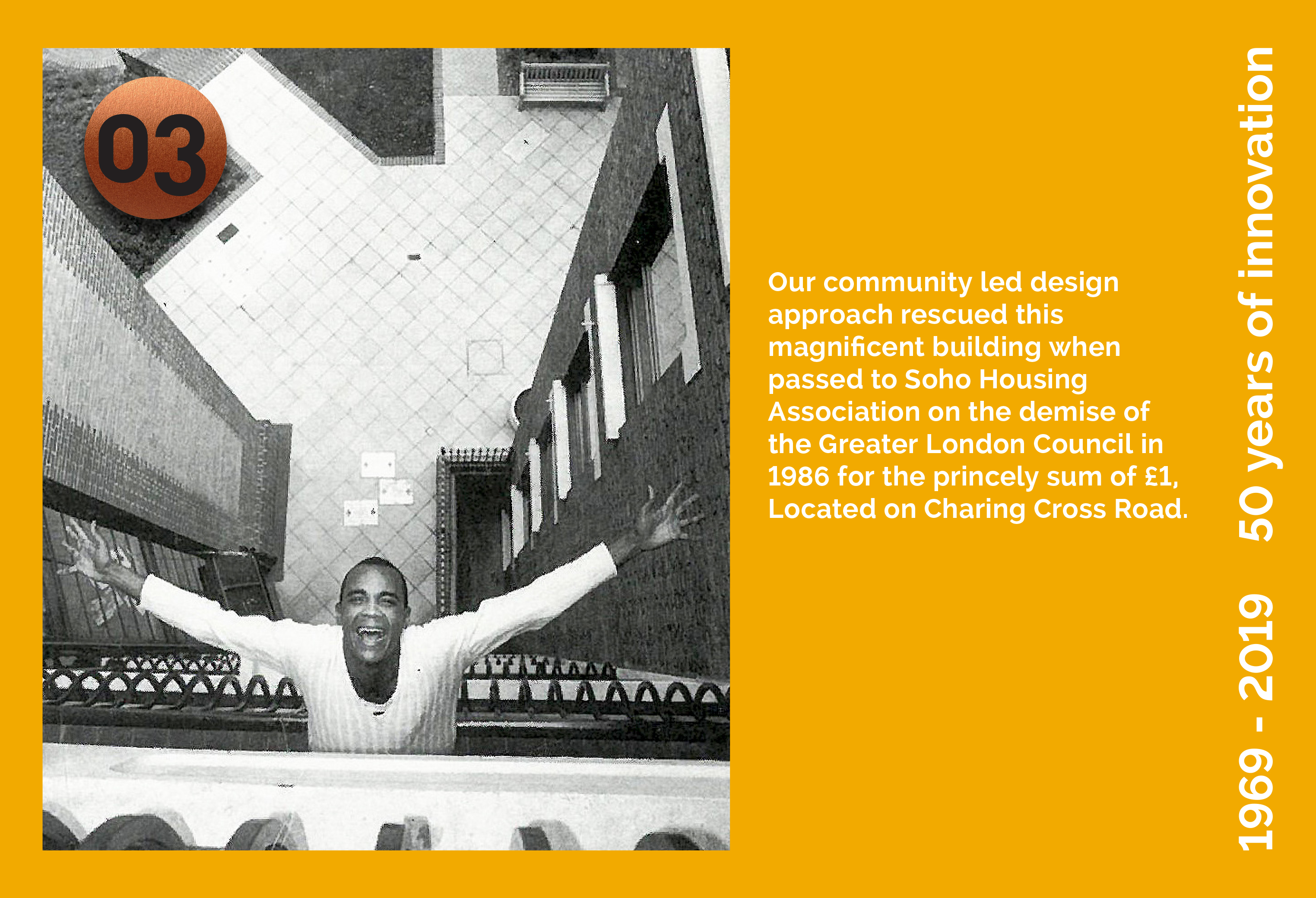 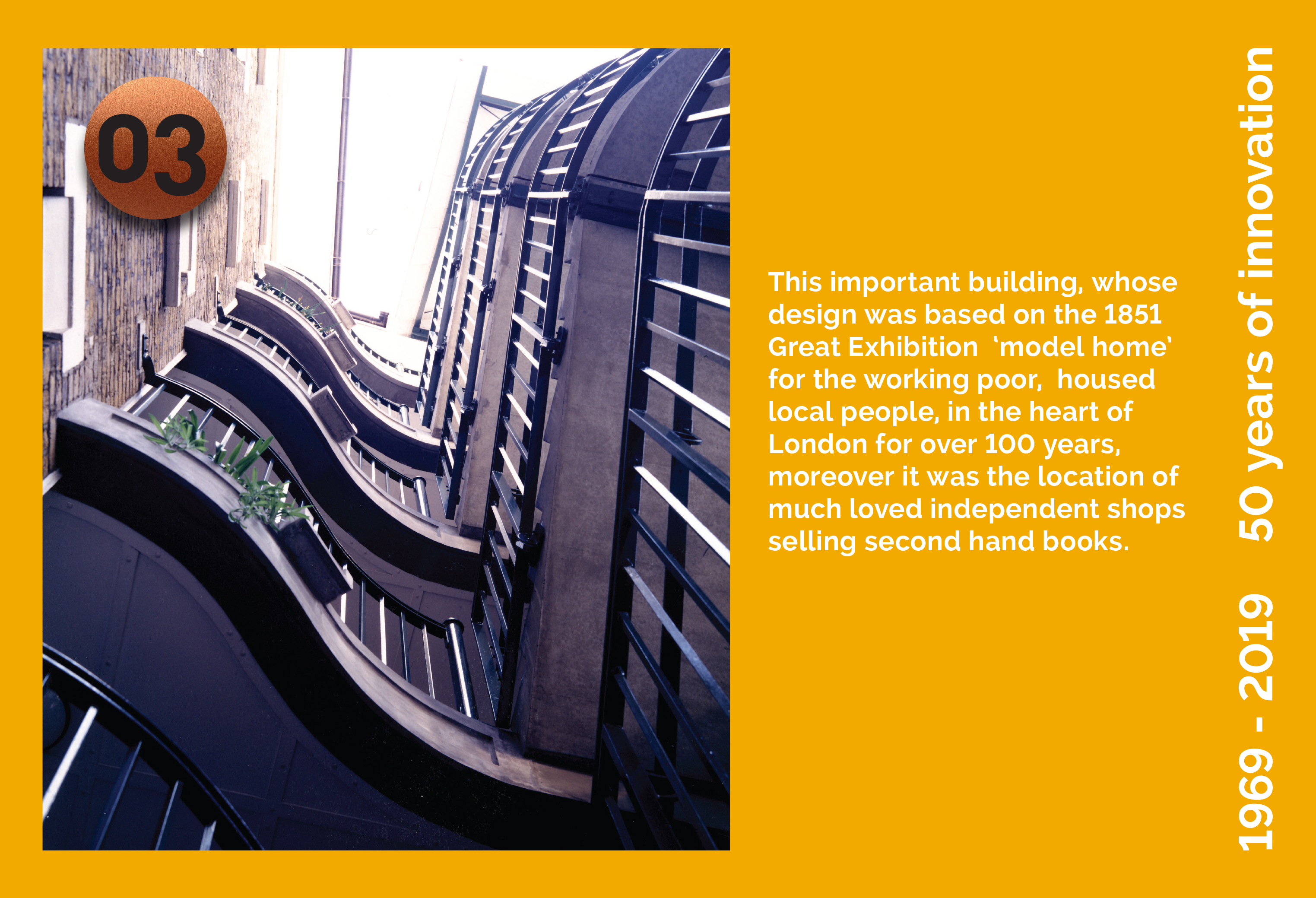 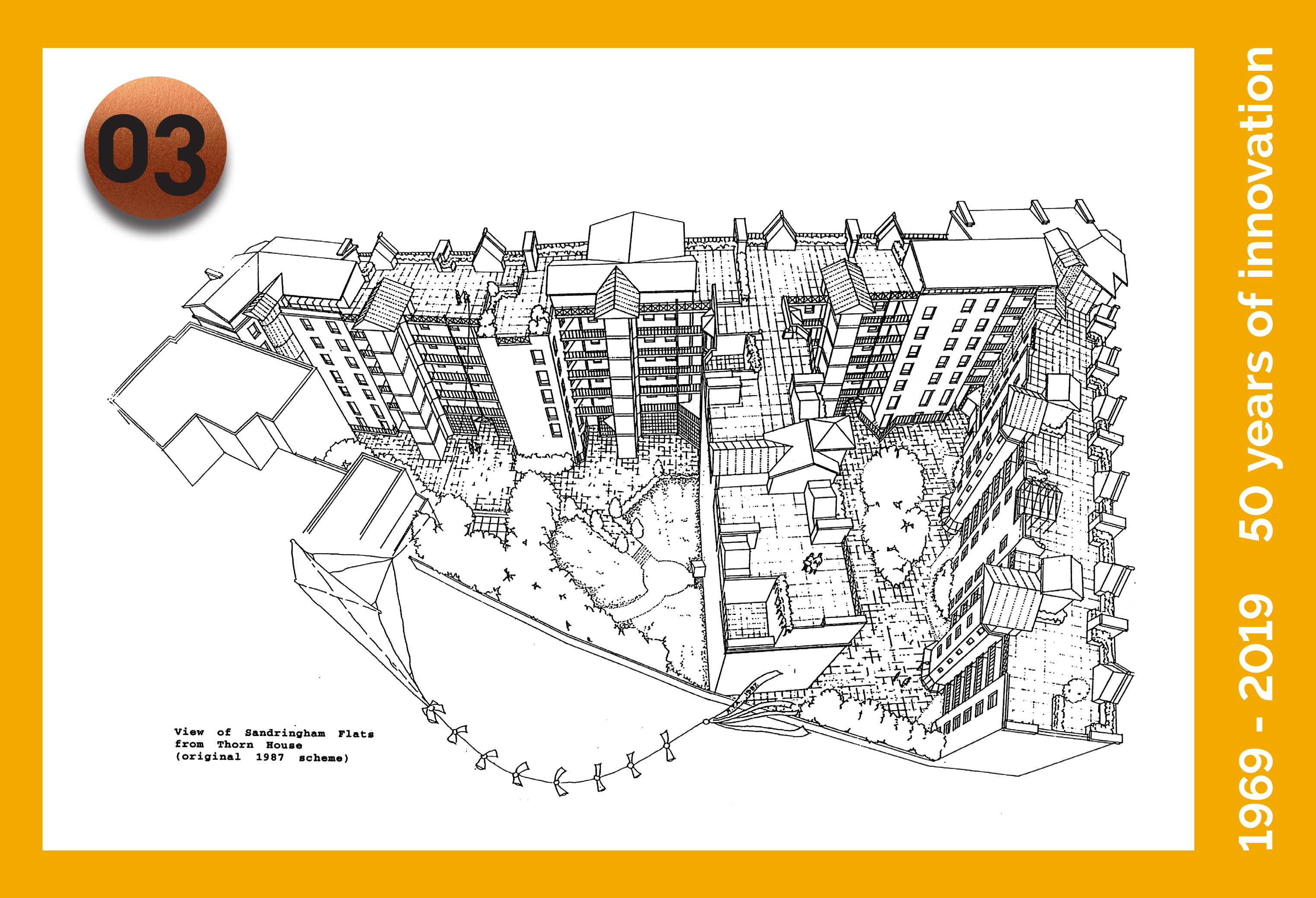 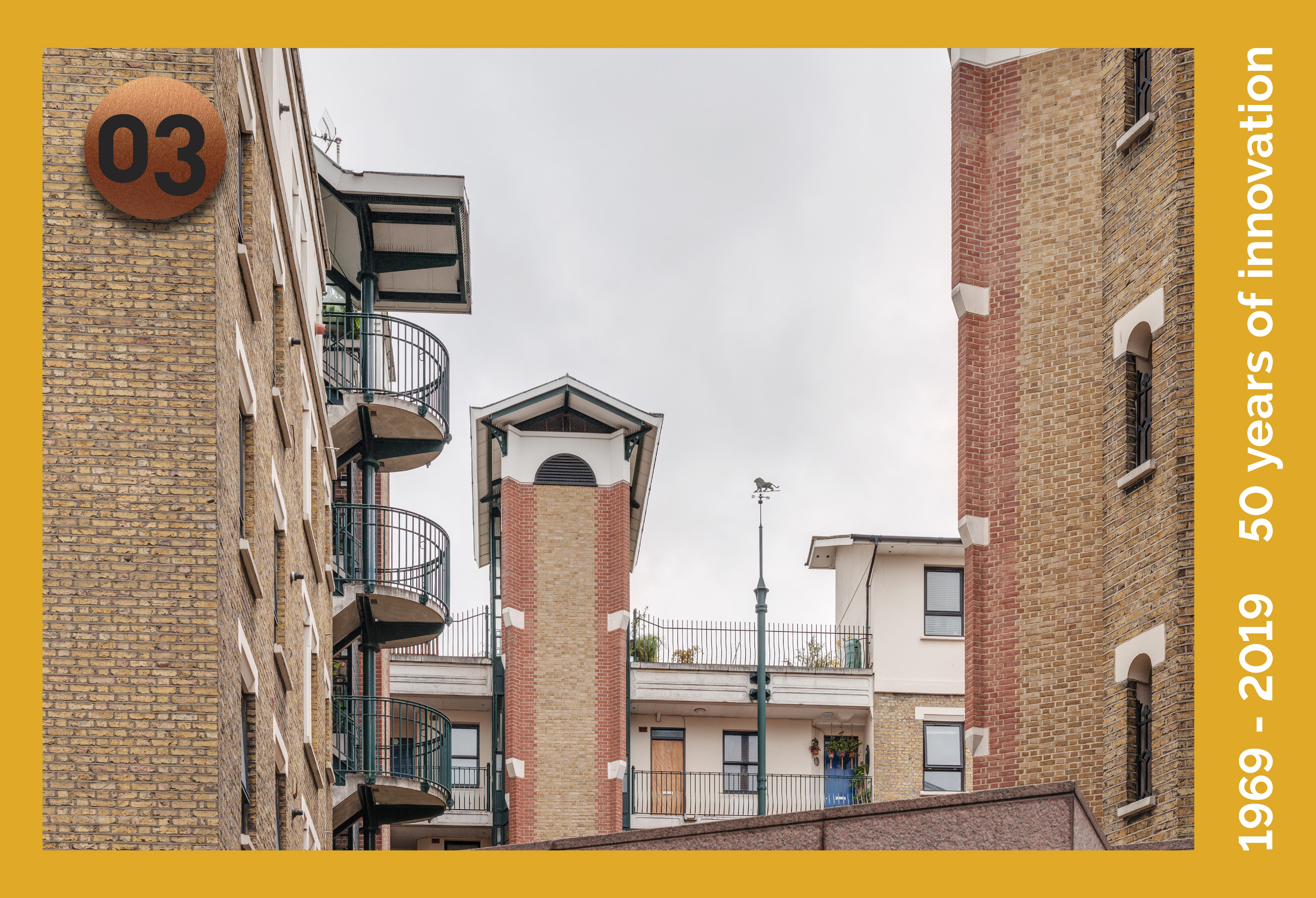 Saving Sandringham Flats from demolition was a key outcome of community activism that saw HTA appointed to work on this wonderful example of Victorian philanthropic housing. Our ‘Community Architecture’ and people led design approach had become well-honed from earlier projects such as Lea View House and , when this magnificent building passed to Soho Housing Association  on the demise of the Greater London Council in 1986 for the princely sum of £1, we were delighted to be commissioned to work with residents to give the buildings, known as Sandringham Flats East, a new lease of life.

Located on Charing Cross Road, this important example of philanthropic housing built by The Improved Industrial Dwellings Company was opened by The Prince and Princess of Wales in 1884 and housed local people, often called ‘artisans or the labouring classes (The key workers of the day), in the heart of London for over 100 years. It was the location of much-loved independent shops selling books, art and clothing, enlivening an area that was fast becoming sterilised by major retail brands.

Our first act was to establish a site office, which maintained the HTA tradition of lunch for staff and guests. From here we undertook a full survey of residents and building fabric. Understanding who lived in the buildings and establishing a relationship with them. We also came to appreciate the building as an excellent example of the ‘Prince Regent’ Model homes for Families, unveiled at the Great Exhibition of 1851. We built up trust and a real friendship with residents through many meetings and discussions. Mr Manley, Hilary Myerscough, Anne Dowse and the irrepressible caretaker Don Head are some of the memorable residents who influenced this project and became entwinned in the lives of all involved.

Our surveys found the building was in very poor shape, the concrete used for balconies used smoke box clinker from steam trains that had corroded the steel reinforcement, meanwhile residents had become used to living with minimal kitchens and with windows and fabric that left homes hard to heat, with only electric heating or colour gas used. The proximity and lack of security meant that prostitution and drug trading was rife on the roof and public spaces, syringes were regularly found, and the threat of strangers meant residents rarely left their homes after dark.

We gradually explored the potential of options leading to a consensus that a major refurbishment was best for both residents and building tested with surveys run by U|S|E|R research, HTA’s subsidiary organisation.

The works were undertaken with great care and affection by our design team and, with new layouts, family maisonettes creating new front doors on to Lichfield St enhancing the route to The Ivy and St Martins Theatre. The courtyards were enhanced by impressive new lift towers and new balconies that reflected the character of the building in a contemporary manner. New ‘penthouses’ crowned a new era for this much-loved building. While residents were decanted for the works, the careful approach to construction meant the ground floor shops continued to trade throughout. The first phase building was opened by Prince Charles, in keeping with the buildings historical opening a century earlier.

Two decades since we completed this major project in maintains its importance in the streetscape of London and has even been chosen as the site of Diagon Alley in Harry Potter and the Half Blood Prince! (alongside 12 Newport St).

Most importantly, the staff at Soho Housing, Ellis and Moore, Walker Richardson and Mendick Waring and constructors, Redhill, Kingsbury and Ladd as well as successive members of HTA forged a long-term relationship based on creating an ongoing legacy of social housing on one of London’s most iconic roads.