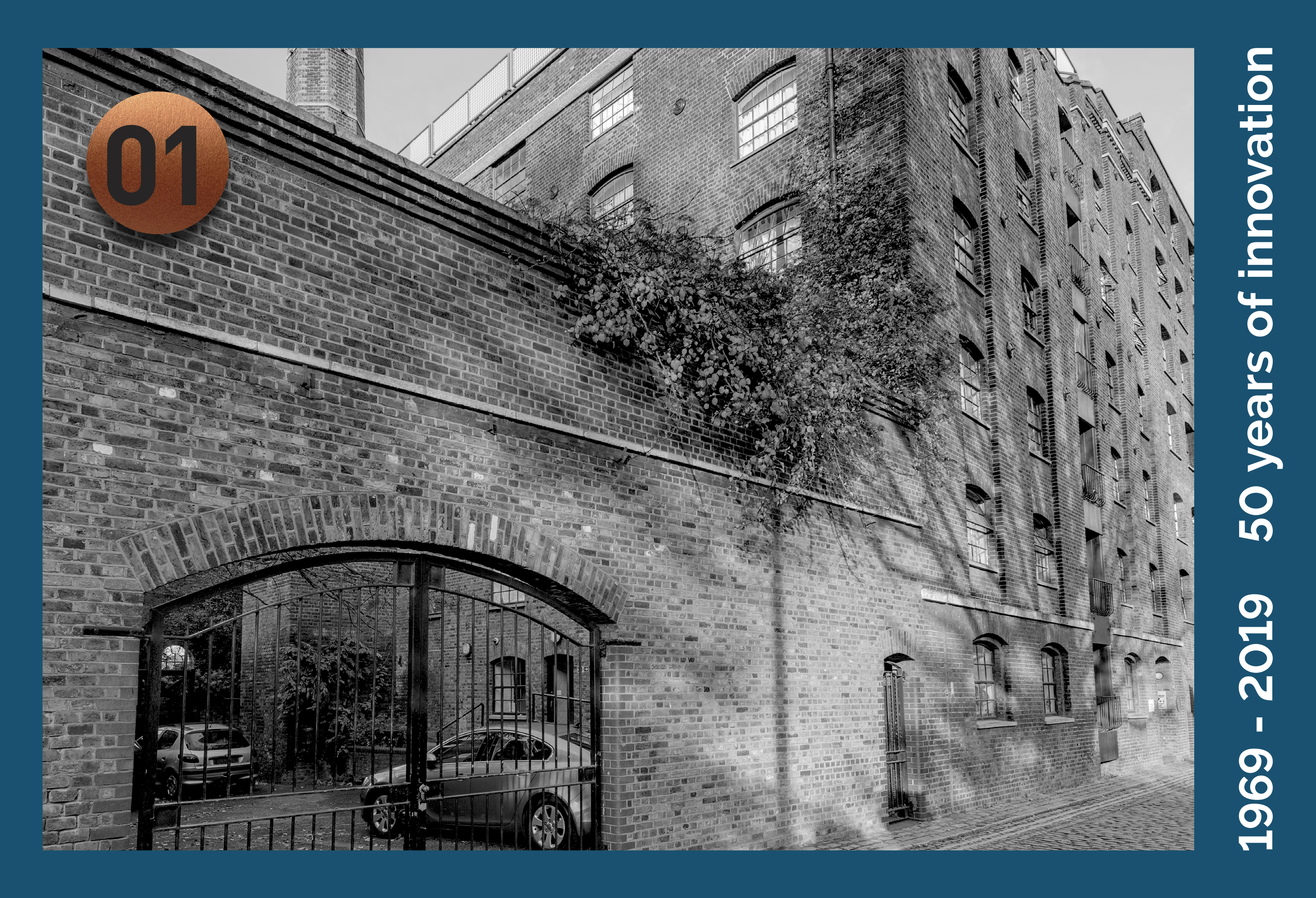 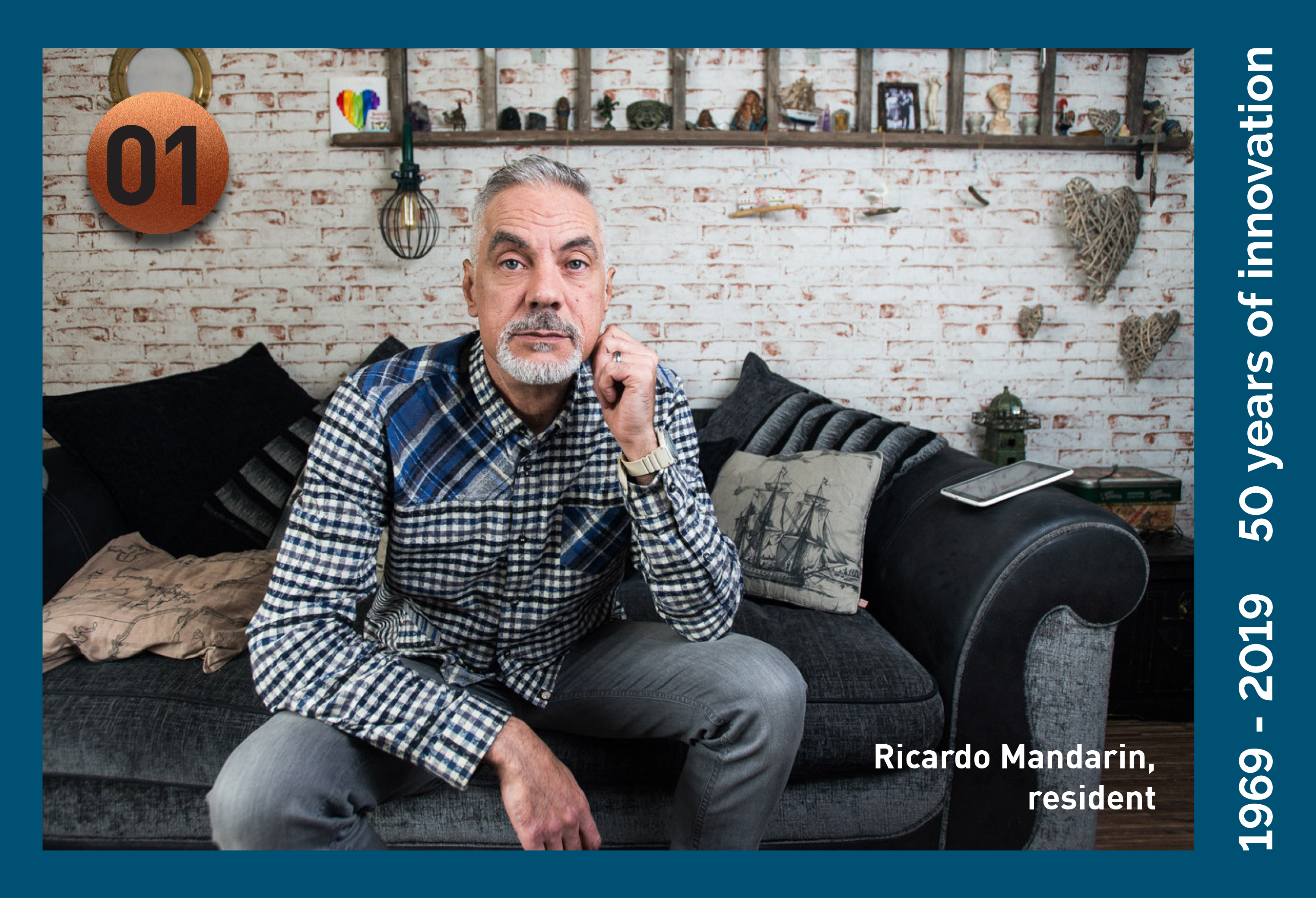 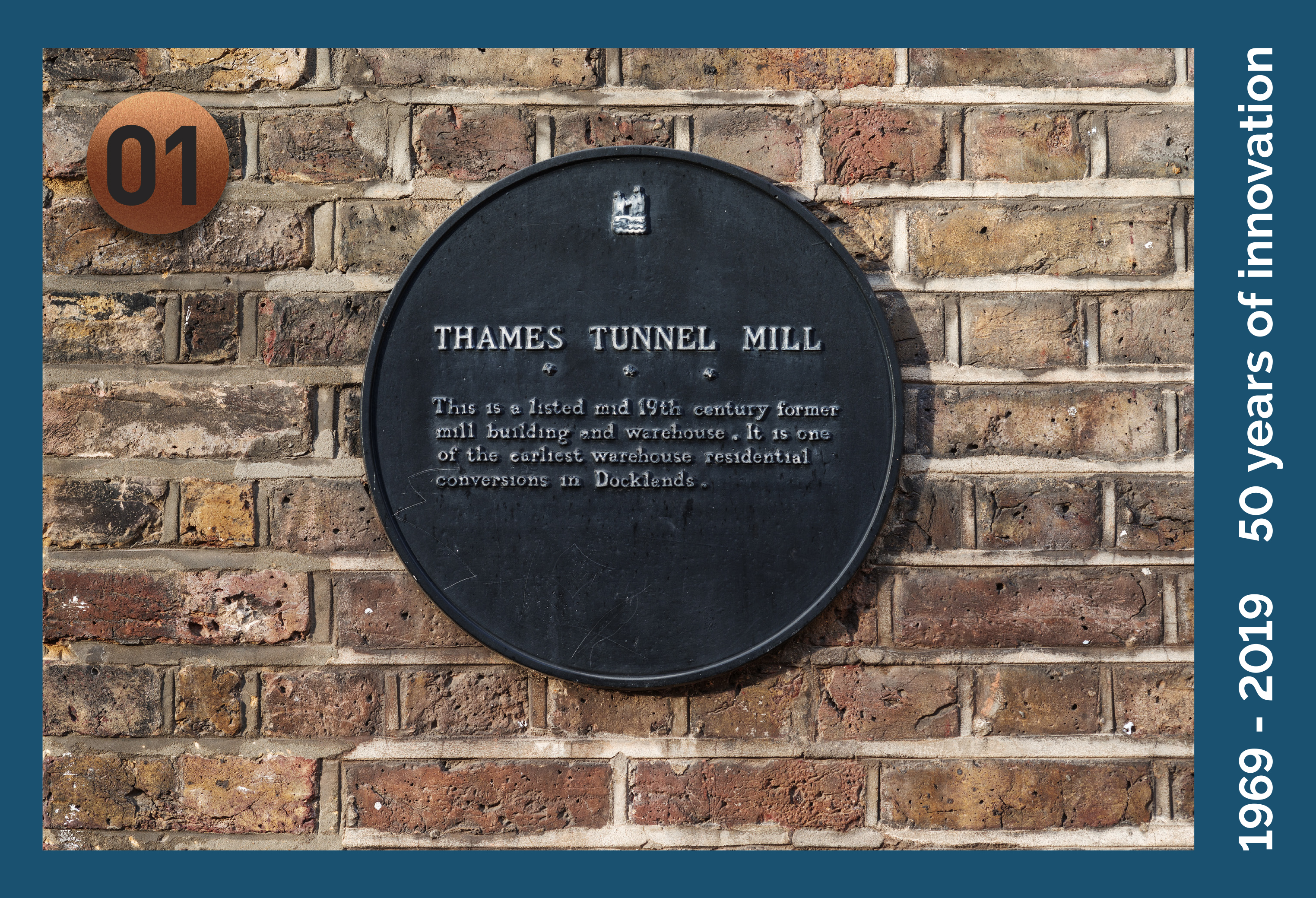 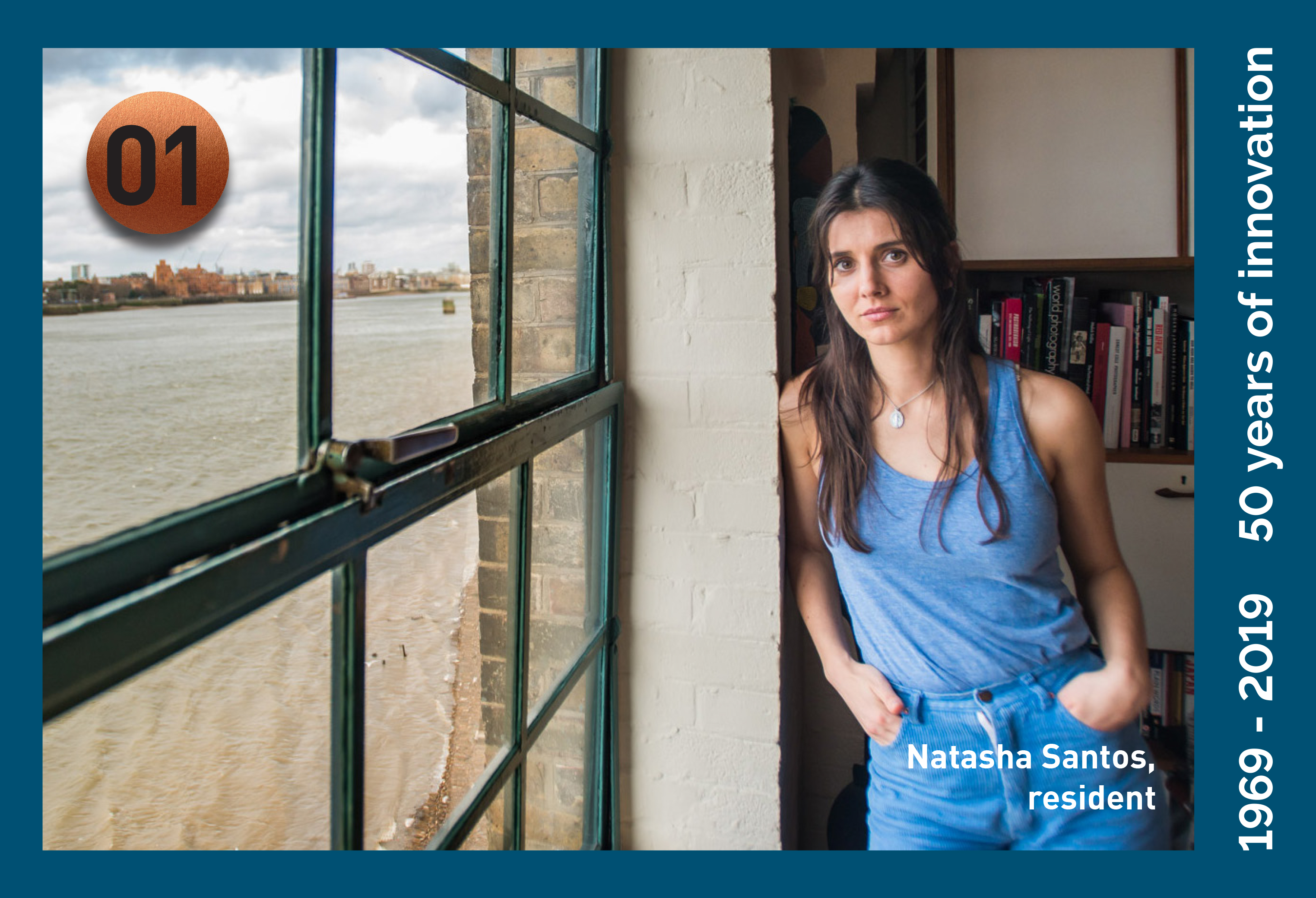 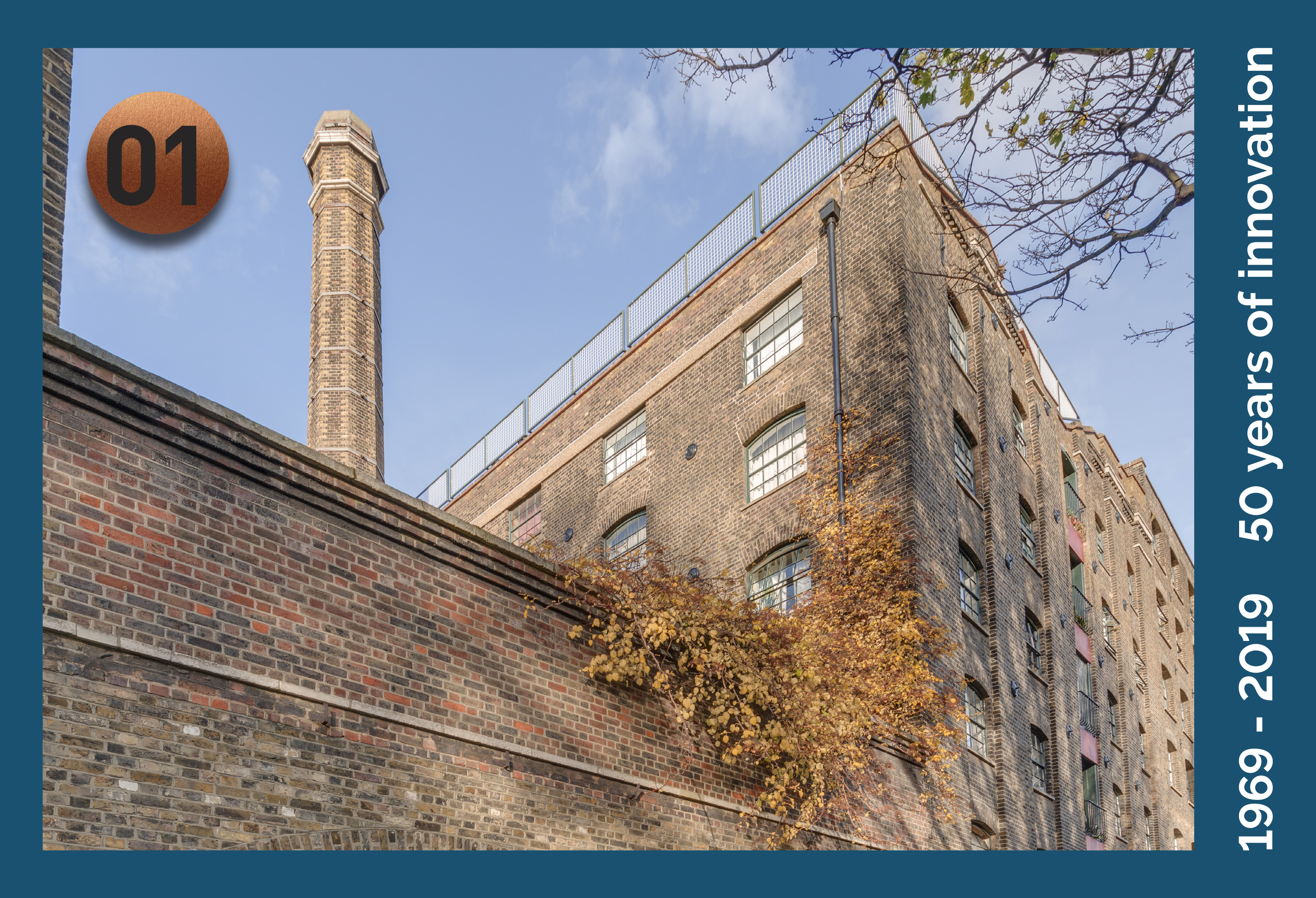 On the River Thames at Rotherhithe next to famous Mayflower is the towering Victorian edifice of Thames Tunnel Mills, named after Brunel’s famous tunnel which was dug almost alongside. Before the red braces, big earrings and even bigger mobile phones swept in to the docks, Hunt Thompson Associates were working with the owners of Thames Tunnel Mills to establish the feasibility of its conversion for a new use as social housing. Shortly after it was listed Grade II.

In use until the early 1960s it was decaying and fire damaged but its substantial brick walls still stood, redolent of the 19th Century working river. Half was a six storey flour mill of 1850, the rest of 1890 a storey taller. Its internal structure of cast iron and heavy timber created the big open spaces of a warehouse.  Conversion called for smaller spaces, natural light, privacy, security and comfort. Space standards, cost limits and the 20 metre plan depth called for deep plan apartments along the external walls, living and sleeping spaces combined at the existing windows, and a new atrium brought light to entrances and bathrooms.

The atrium was an innovation addressing the challenge of the deep plan; a communal space to encourage social interaction as well as bringing natural light and ventilation. Access galleries line the atrium and distribute services as well as people. An existing brick silo in the middle of the plan was adapted as a lift and stair core with visual connections to the atrium. The proposal included a flat for on-site concierge, a laundry, a common room with terrace, and a spectacular roof garden with views of the Thames and across the Rotherhithe conservation area. The existing brick chimney, cast iron crane were retained and a rebuilt timber jetty recalled the industrial riverside heritage. Planning approval for 71 flats accommodating 119 people was secured in 1978.

In the detailed design the existing floor structures was reconfigured to achieve the required compartmentation. After transfer to London and Quadrant Housing Trust the contractor, Eve Construction, secured the brick elevations, gutted the building and then introduced the new structure tying back the existing walls with resin anchors. Some of the cast iron columns and heavy timber beams were re-used in the galleries evoking the Victorian warehouse aesthetic. Windows were replaced with replica metal framed windows.

Construction was completed in late 1983.  Hunt Thompson Associates provided the full architectural service from inception to completion. The opening party coincided with the 10th birthday of L&Q, so to celebrate a the association joined with Hunt Thompson to co-host a lavish opening party. Guests arrived by a Thames barge embarking from Tower Pier, sailing under Tower Bridge which was opened to allow the boat to pass downstream. After arriving at the jetty there was a fireworks display, and in the atrium a tightrope walker entertained while a Jazz band played. The final theatrical flourish was a helium balloon lifting the cover on the dedication plaque unveiled by Richard, Duke of Gloucester, one of the founding Partners of Hunt Thompson Associates.

The first residents were typically in their mid to late twenties having ties of family or employment in the area. The on-site management of the building encouraged a sense of community that has developed and grown in the decades since the building was opened. Though one of the earliest warehouse conversions it is the only one that remains affordable housing.

The Residents
As part of our 50th year, we went back to talk to some of the residents who live there, here's what they had to say…

Ricardo Mandarin
“I moved in here 25 years ago. I was made redundant, so I went to the council. They offered me a housing association flat and sent me here.

When I passed the address and looked through the front door, I thought ‘No, this is too posh’, and I kept walking. I thought I couldn't find the place. Then I stopped a woman who was walking along and asked her, ‘do you know this Thames Tunnel Mills place?’

She said ‘Come with me, I live there’, and took me back to that front door. I walked in and looked up at the atrium. She was staring at me; she said something like, ‘I always want to see my face when I first saw this place - how I was, like you!’

As I walked into my flat for the first time I saw the river through the window. It was only a studio but I didn't notice at first - all I saw was the view.

It is all about community. The building was designed for single people and key workers, and with all the flats leading out into the atrium, it really pushes people together. It is perfect for housing.

This building is beautiful and well-designed. I am proud to live here; everybody should be.

I would say to the designer - congratulations, great job. I’d like to take them for a coffee.”

Natasha Santos
“It’s a really solid building I feel safe here - it’s not going anywhere. It has a lovely feeling.

The communal spaces are huge and the corridors are nice and big. London can be hard but here it is great.

My daughter Celia was born in this room one summer. I wonder if she was the first baby born here?

You go to sleep listening to the sound of waves crashing. You can watch swans fly past. I know what swans wings sound like now. We’ve seen seals out there, and a Thames porpoise.

There is never any trouble. I wonder if it’s because this building is so solid? I think the river keeps everyone a bit peaceful.”

Marilena Ricciardi
“There is a real community in Thames Tunnel Mills. we are all friends. there are many common areas where we can meet. I love being here, it feels like home. My favourite part is the jetty, it’s the most intimate place. It sounds so posh ‘we have a private jetty’. Everyone loves the roof terrace too, you can sit in the atrium and listen to the rain hitting the glass roof above you.

You finish work and think I’ll go and have a beer upstairs’ and you know you will find the same bunch of people up there and you will have a laugh.

Everyone here is so much in love with TTM. it feels good to be a part of it. it’s a beautiful place, but it’s the people who really make it what it is.”