Auckland Rise features on the front cover of The Architects' Journal 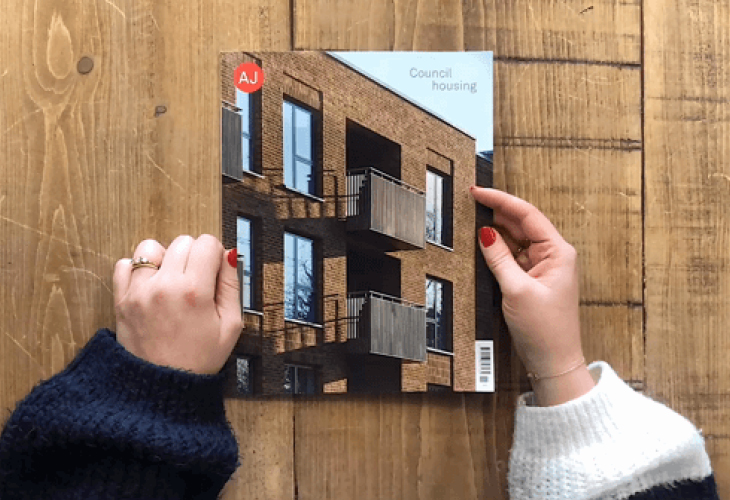 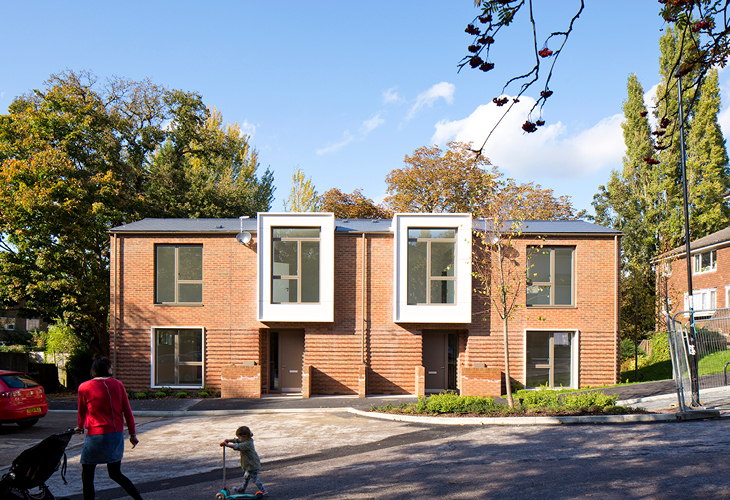 Intelligent infill in London’s suburbs is particularly needed right now, being a highly sustainable use of land otherwise wasted on old garages and other spaces with no particular function. However, it is an exceedingly sensitive and challenging undertaking, because of its impact on communities. Best intentions collide with the expectation that the character and natural assets of suburban places are somehow conventionally detached from the urban imperative to mutate. Infill developers must positively engage with residents to overcome fears that new interventions will fail to respond to the character of an area, or fail to integrate effectively, or fail to improve access and local services.

Brick By Brick, Croydon Council’s housing development company, initiated a Smaller Sites programme in 2015 to deliver much-needed homes for the borough. The programme offers an interesting example of a relatively extensive infill scheme in a suburban context with its own specific DNA. Each Smaller Sites Programme architect and contractor gets a package of sites and the results come out of a collaborative process, during which all team members share a lot of information, including through PechaKucha and design sessions.

At Auckland Rise, HTA makes the most of a pleasant outlook through permeability to the landscape across the site, making the most of the apartments’ dual aspect and carefully placing generously sized windows in upstairs and ground-floor hallways and communal interior spaces to ensure that a range of views are part of the quality of life of occupants. The new buildings are judiciously placed in the landscape. HTA partner Caroline Dove, who runs the practice’s Brick By Brick schemes, recalls that the practice moved the proposed positions of the blocks a number of times during the three resident consultations.

The fact that there are plenty of trees on the site has not resulted in a detached treatment of the buildings. ‘The buildings are calmly integrated into the site,’ is how Dove puts it. Brick is used in a bespoke way for each block’s elevations. The new L-shaped, 16-flat Block A on Church Road, a high point on the Auckland Rise site, for example, features rusticated brickwork combined with olive-coloured, semi-recessed balconies. Brick By Brick’s decision to allow a high degree of standardisation in materials encourages attractive choices. The theme of brickwork enables versatility, demonstrated by HTA’s choice of rustic stock, which helps with the organisation of elevations. Forms are generally easy and practical, without too many setbacks, and require not much steelwork.HTA’s infill strategy at Block A introduces a new planted garden abutting a green space to an existing housing block, and creates a protected place for small children to play in and for residents to enjoy the weather, while maintaining good sightlines from and to the apartments. The arrangement demonstrates the added value of the design introduced through collaboration with residents, with the introduction of more trees, play spaces and a food-growing area, new footpaths and lighting, and improved parking layouts. 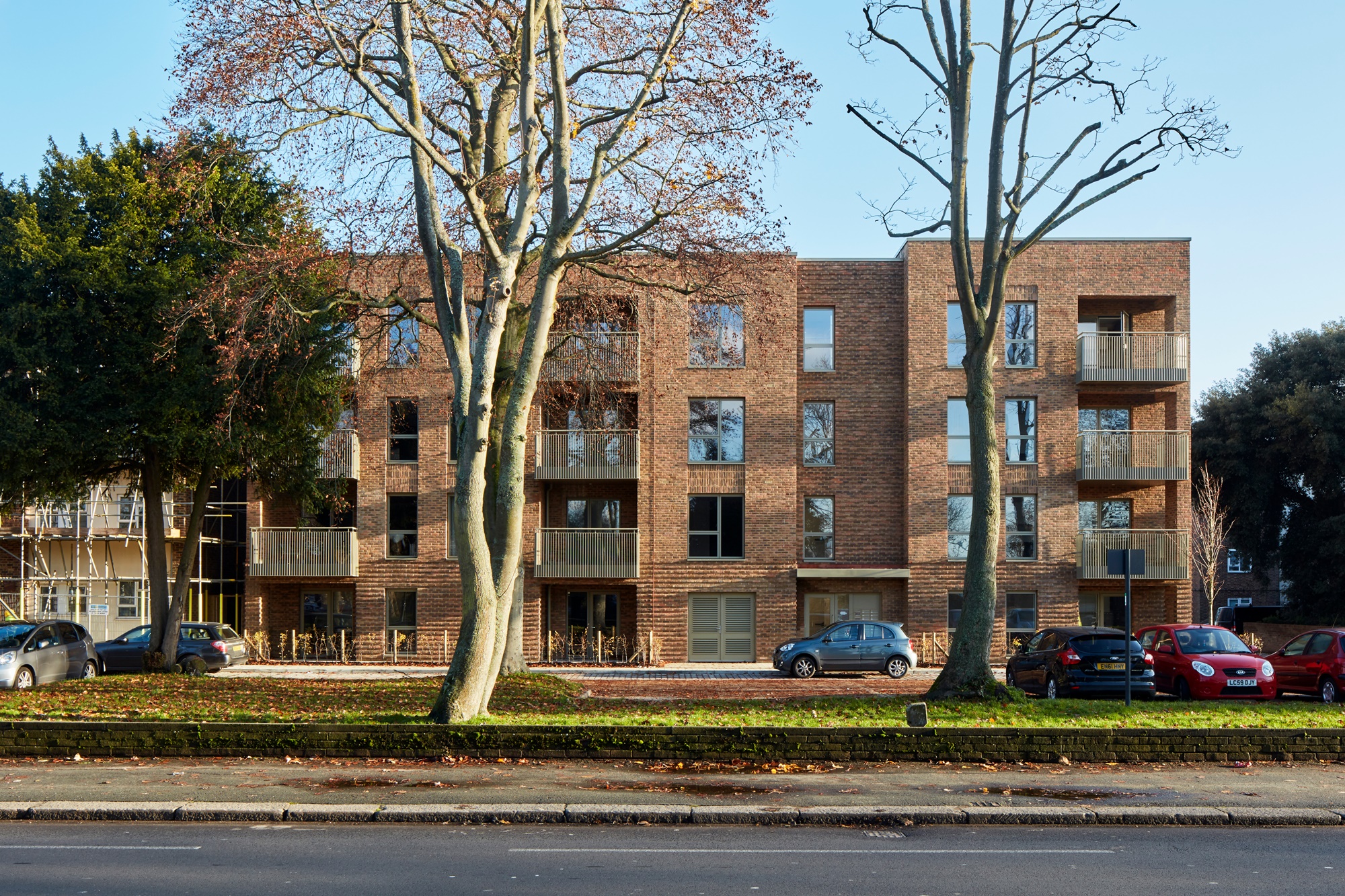 The elevations on Church Road alongside the existing housing block inject warmth of character into the streetscape. The tones and rhythm of the rustication resonate with the natural planting and building vernacular of the wider neighbourhood. The new blocks foster a sense of civic character and community and set the tone for the more secluded buildings in the scheme.

‘A lot of the buildings across the site look different externally, but there is more of a common appearance inside,’ says Dove. The handling of the layouts maximises the sense of space by including features such as the addition of a big side window to a balcony or extending a living room with a small windowed area for sitting in.

There are no fitted wardrobes, an option traded for homespun herringbone-patterned solid wood floors most other developers would not do. Creative input on all Brick By Brick’s interiors is by Common Ground Architecture, whose work draws out recognisable brand values by specifying good materials for worktops, oak handles, porcelain tiles and herringbone-patterned ceramic bathroom tiles, for examples. 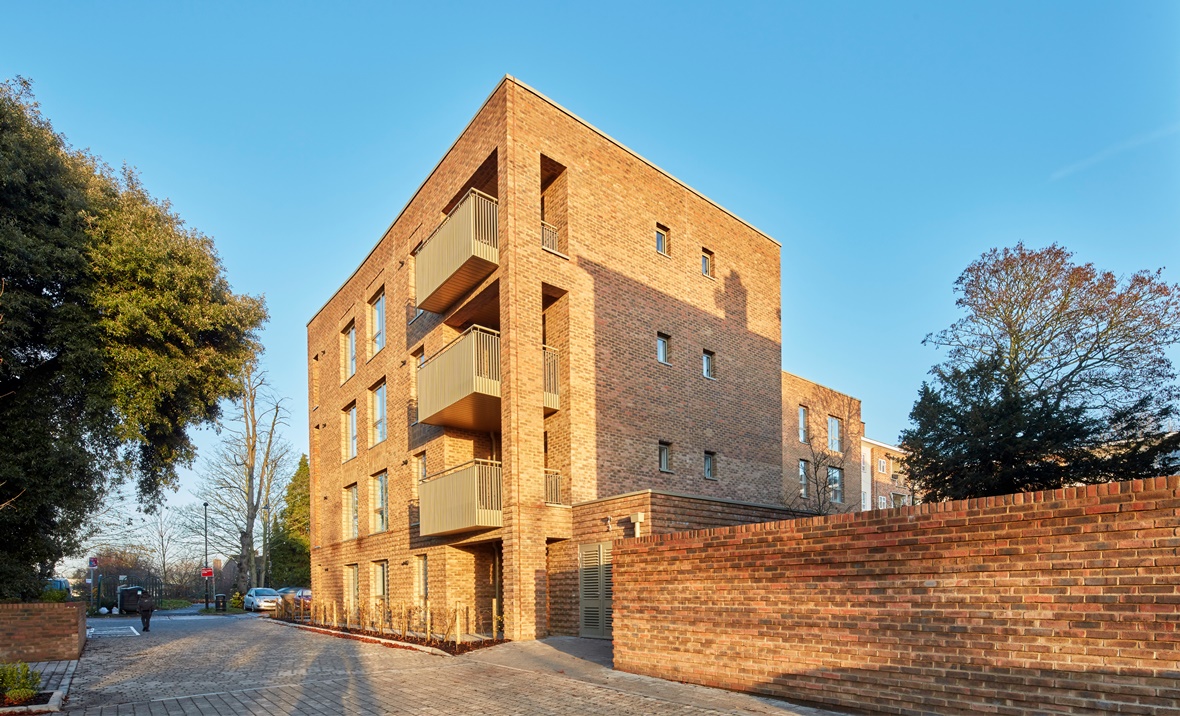 The Ravensdale Gardens scheme, a short distance to the north across the A212 on the north slope of the ridge, nestles in an existing enclave of family homes. It is a skilful insertion, involving the removal of garages that were a visual blight, and the use of that land for 17 family houses. The pitched-roof structures, a mix of two and three-storey configurations, include big picture windows, sheltered entrances and small terraced gardens. They share the panellised timber frame construction choice adopted at the Auckland Rise site. Approaching the first of the new houses from the road, the warm tones of the brick are pleasing. As a group, the buildings read as an intelligent play-off between home archetypes and something more innovative.

In front of the two main house blocks, HTA has brought the fragmented space together into a fully formed streetscape, giving the now more populated ‘enclave’ a central play area, greenery, and on-street parking with electric car charging points. Getting the levels to integrate across the site was part of the challenge of making it work, but now the area in front of the houses is more user-friendly, characterful and permeable. While it is not exactly a ‘woonerf’ (Dutch ‘living street’), as there is not the room in this particular context, it is a good connector – a neighbourhood space contrived to serve all residents well.

Brick By Brick has a very clear sense of what it expects from its collaborating architects in order to deliver the best quality for the best value. Chloë Phelps, Brick By Brick’s head of design and commercial projects, describes the approach as ‘high design making the most of local character. A good level of ordinary’. The first completions on these two sites show the benefits of Brick By Brick’s specification of taller floor-to-ceiling heights. Maximum effort has also gone into layouts through subtle changes to make better-appointed spaces, more geared to movement.

Brick By Brick currently has 25 sites in construction across the borough of Croydon, including Faithful Court, a nine-unit development with some new landscaping by 2019 RIBA Stirling Prize winner Mikhail Riches, and the Pump House, with a library, by Common Ground Architecture, due for completion in May. All the sites feature quite straightforward buildings, not showy, which are robust and have an identifiable language of distinctive brickwork detailing to give individual presence and character.

‘It’s fast, and we haven’t skimped on quality,’ says Colm Lacey, CEO of Brick By Brick. ‘The main reason for focusing on smaller sites is because they are available; London has a lot of them and they’re not being tackled by other developers. Housing associations are now working on bigger entities.’ With its third Smaller Sites programme due to complete in 2025, the arm’s length developer is starting to acquire larger sites and is keen to explore other forms of affordable housing development, including more community-led housing, working with the Crystal Palace Community Land Trust.

Brick by Brick suffered a recent embarrassment when it came to light that it needed to be a registered provider of shared-ownership homes, but this is rapidly being arranged, as an official statement on its website confirms, and the developer is working with purchasers to match them with mortgage providers that do not require registration to lend on intermediate homes. Brick By Brick’s delivery of shared ownership homes to purchasers on as little as a 25 per cent share is key to its reputation for affordability. The overall strategy for creating these homes celebrates the local, while being decidedly anti-masterplan. By creating a more lively, liveable suburbia, the effects will extend far wider than just the local.

Lucy Bullivant is a curator and writer on architecture and design

The original 1950s flats at Auckland Rise were described by Pevsner as ‘good housing taking advantage of the trees on the site’. Mature trees and distant views are assets of this steeply wooded site, once the edge of the Great North Wood.

Infill sites are constrained and challenging, and we worked closely with council officers and residents, who were consulted extensively throughout the design. Changes were made to the siting of blocks in response to comments and feedback. Residents benefit from additional tree planting, play spaces, food-growing places, new footpaths and lighting, agreed in collaboration.

Sustainability is a key objective. The new homes have been designed to minimise energy consumption while maximising exposure to daylight and sunlight. Most flats are dual-aspect and the internal layouts allow for views through, with windows in hallways and communal spaces. Panellised timber frame was selected for construction here and at nearby Ravensdale Gardens, with good insulation and airtightness, and rationalised, vertically stacking plans. Semi-recessed balconies provide generous private amenity and contribute to solar shading. New residents are encouraged to walk and cycle and, while parking layouts have been improved for existing residents, parking for new residents is kept to a minimum.