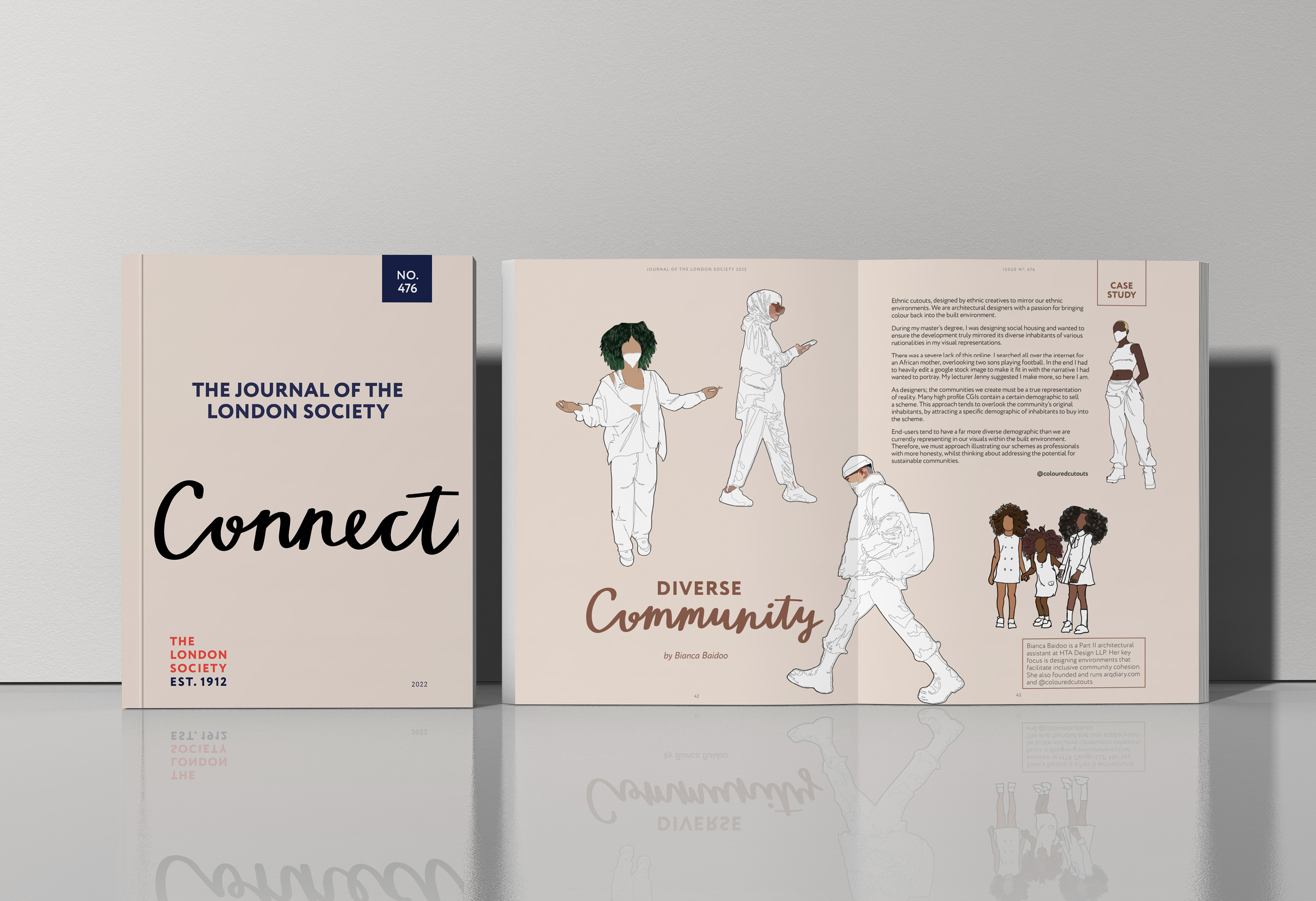 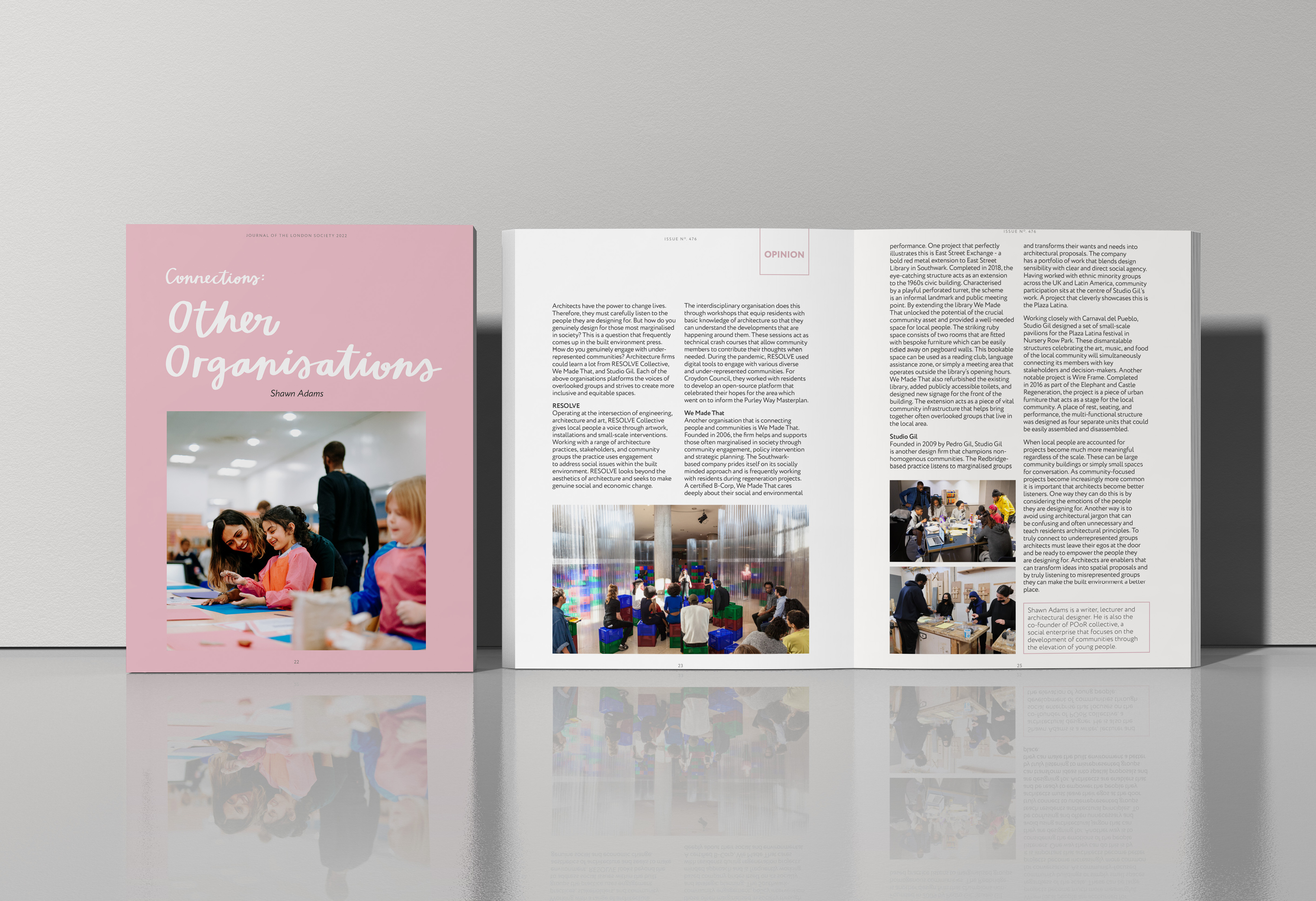 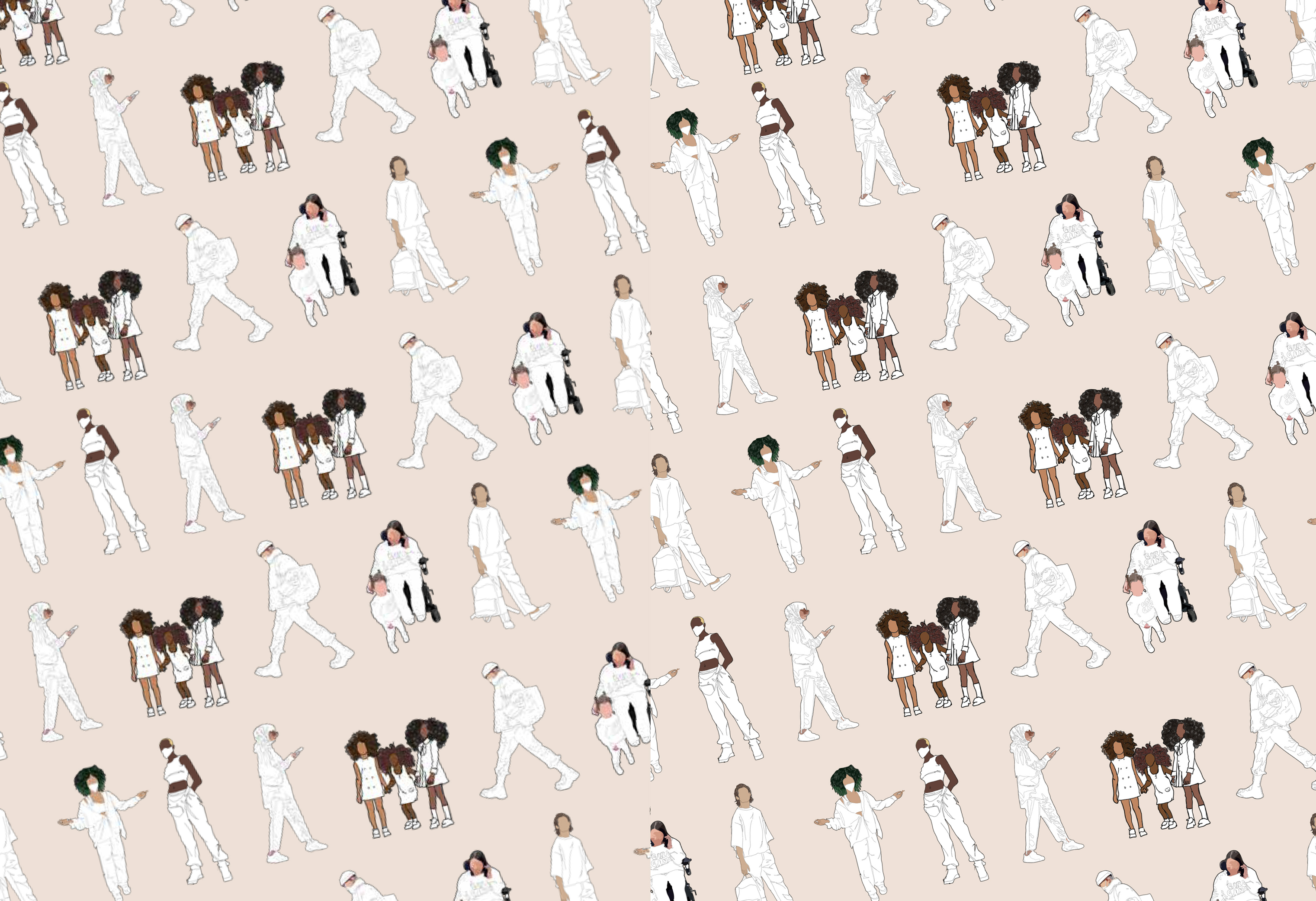 The team were super excited to read this month’s London Society: Connect. The Journal is designed fabulously by HTA’s Comms Partner, Lucy Smith with beautiful typography by Nerea Bermejo.

Not only that, we also have such meaningful articles by HTA’s Bianca Baidoo & Shawn Adams, see below:

Architects have the power to change lives.Therefore, they must carefully listen to the people they are designing for. But how do you genuinely design for those most marginalised in society? This is a question that frequently comes up in the built environment press. How do you genuinely engage with underrepresented communities? Architecture firms could learn a lot from RESOLVE Collective, We Made That, and Studio Gil. Each of the above organisations platforms the voices of overlooked groups and strives to create more inclusive and equitable spaces.

Operating at the intersection of engineering, architecture and art, RESOLVE Collective gives local people a voice through artwork, installations and small-scale interventions. Working with a range of architecture practices, stakeholders, and community groups the practice uses engagement to address social issues within the built environment. RESOLVE looks beyond the aesthetics of architecture and seeks to make genuine social and economic change. The interdisciplinary organisation does this through workshops that equip residents with basic knowledge of architecture so that they can understand the developments that are happening around them. These sessions act as technical crash courses that allow community members to contribute their thoughts when needed. During the pandemic, RESOLVE used digital tools to engage with various diverse and under-represented communities. For Croydon Council, they worked with residents to develop an open-source platform that celebrated their hopes for the area which went on to inform the Purley Way Masterplan.

Another organisation that is connecting people and communities is We Made That. Founded in 2006, the firm helps and supports those often marginalised in society through community engagement, policy intervention and strategic planning. The Southwark based company prides itself on its socially minded approach and is frequently working with residents during regeneration projects. A certified B-Corp, We Made That cares deeply about their social and environmental performance. One project that perfectly illustrates this is East Street Exchange - a bold red metal extension to East Street Library in Southwark. Completed in 2018, the eye-catching structure acts as an extension to the 1960s civic building. Characterised by a playful perforated turret, the scheme is an informal landmark and public meeting point. By extending the library We Made That unlocked the potential of the crucial community asset and provided a well-needed space for local people. The striking ruby space consists of two rooms that are fitted with bespoke furniture which can be easily tidied away on pegboard walls. This bookable space can be used as a reading club, language assistance zone, or simply a meeting area that operates outside the library’s opening hours. We Made That also refurbished the existing library, added publicly accessible toilets, and designed new signage for the front of the building. The extension acts as a piece of vital community infrastructure that helps bring together often overlooked groups that live in the local area.

Founded in 2009 by Pedro Gil, Studio Gil is another design firm that champions nonhomogenous communities. The Redbridge based practice listens to marginalised groups and transforms their wants and needs into architectural proposals. The company has a portfolio of work that blends design sensibility with clear and direct social agency. Having worked with ethnic minority groups across the UK and Latin America, community participation sits at the centre of Studio Gil’s work. A project that cleverly showcases this is the Plaza Latina. Working closely with Carnaval del Pueblo, Studio Gil designed a set of small-scale pavilions for the Plaza Latina festival in Nursery Row Park. These dismantalable structures celebrating the art, music, and food of the local community will simultaneously connecting its members with key stakeholders and decision-makers. Another notable project is Wire Frame. Completed in 2016 as part of the Elephant and Castle Regeneration, the project is a piece of urban furniture that acts as a stage for the local community. A place of rest, seating, and performance, the multi-functional structure was designed as four separate units that could be easily assembled and disassembled. When local people are accounted for projects become much more meaningful regardless of the scale. These can be large community buildings or simply small spaces for conversation. As community-focused projects become increasingly more common it is important that architects become better listeners. One way they can do this is by considering the emotions of the people they are designing for. Another way is to avoid using architectural jargon that can be confusing and often unnecessary and teach residents architectural principles. To truly connect to underrepresented groups architects must leave their egos at the door and be ready to empower the people they are designing for. Architects are enablers that can transform ideas into spatial proposals and by truly listening to misrepresented groups they can make the built environment a better place.

Bianca created colouredcutouts, after struggling to find true representation of the communities we engage with on a daily basis within our environments. She took it upon herself to create vector illustrations to mirror our true ethnically diverse environments which are now used across built environment communications. These drawings make gorgeous inside covers for this edition -

Ethnic cutouts, designed by ethnic creatives to mirror out ethnic environments. We are architectural designers with a passion for bringing colour back into the built environment. During my master’s degree, I was designing social housing and wanted to ensure the development truly mirrored its diverse inhabitants of various nationalities in my visual representations. There was a severe lack of this online. I searched all over the internet for an African mother, overlooking two sons playing football. In the end I had to heavily edit a google stock image to make it fit in with the narrative I had wanted to portray. My lecturer Jenny suggested I make more, so here I am.

As designers, the communities and areas we create must be a true representation of their reality. Many, high profile CGI’s contain a certain demographic to sell a scheme. This approach tends to overlook the scheme's original inhabitants, by attracting a specific demographic of inhabitants to buy into the scheme. End-users tend to have a far more diverse demographic, than that we are currently representing in our visuals within the built environment. Therefore, we must approach illustrating our schemes as professionals with more honesty, whilst thinking about addressing the potential for sustainable communities.