Natalya writes for RTPI The Planner Magazine on 'gender-mainstreaming' 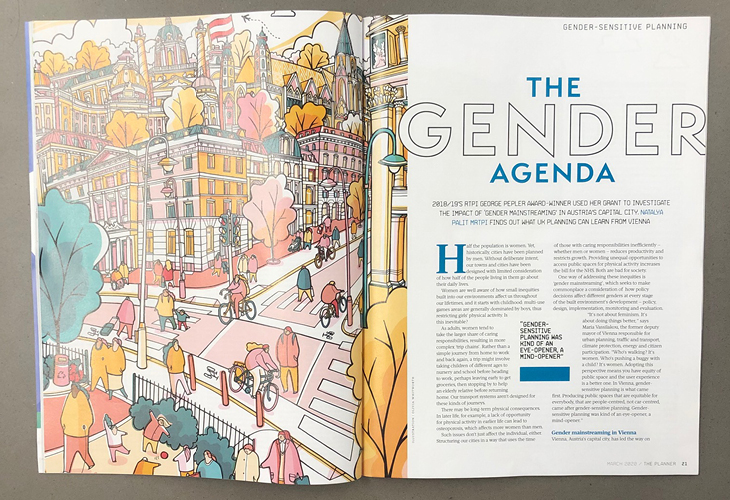 Half the population is women. Yet, historically, cities have been planned by men.
Without deliberate intent, our towns and cities have been designed with limited consideration of how half of the people living in them go about their daily lives.

Women are well aware of how small inequities built into our environments affect us throughout our lifetimes. Let’s start with childhood: multi-use games areas are generally dominated by boys, thus restricting girls’ physical activity. Is this inevitable?

As adults, women tend to take the larger share of caring responsibilities, resulting in more complex ‘trip chains’. Rather than a simple journey from home to work and back again, a trip might involve taking children of different ages to nursery and school before heading to work; perhaps leaving early to get groceries; then stopping by to help an elderly relative before returning home. Our transport systems aren’t designed for these kinds of journeys.

There may be long-term consequences. In later life, for example, the lack of opportunities for physical activity in earlier life can lead to osteoporosis - and women, it turns out, are far more susceptible than men.

Such issues don’t just impact the individual, either. Structuring our cities in a way that uses the time of those with caring responsibilities inefficiently - whether men or women - reduces productivity and restricts growth. Providing unequal opportunities to access public spaces for physical activity increases the bill for the NHS. Both are bad for society.

How do we address these inequities? One approach is ‘gender mainstreaming’, which seeks to make it commonplace to consider how policy decisions might affect different genders. It addresses inequality in the built environment by integrating a gender perspective into every stage of the development cycle – policy, design, implementation, monitoring and evaluation – with the aim of promoting equality between women and men.

“It’s not about feminism. It’s about doing things better,” stresses Maria Vassilakou, the former deputy mayor of Vienna responsible for urban planning, traffic and transport, climate protection, energy and citizen participation. “The first generation [of feminists] had an ideological approach. Many of our generation are feminists, but the way we applied it was less ideological. It was more like ‘How else?’.

She continues: “Who’s walking? It’s women. Who’s pushing a buggy with a child? It’s women. Adopting this perspective means you have equity of public space and the user experience is a better one.

Vienna, Austria’s capital city, has led the way on integrating gender mainstreaming into its urban planning. It started in 1991, when the municipality held an exhibition titled ‘Who does public space belong to? - women’s everyday life in the city’. The exhibition attracted significant media attention and played a part in bringing about a new Department for Women’s Affairs.

Driven by the department, the city has adopted gender mainstreaming in a number of administrative areas, including education and health care policy; but it has had most impact within urban planning. Indeed, so important was planning considered to be that in 1998 the city set up a specialist women’s urban planning unit.

Since the early 90s, Vienna’s planners have undertaken more than 60 pilot projects tackling different aspects of urban planning and design. These have ranged from improving streetscapes and public parks to housing projects designed by women with women in mind. They are typically small-scale interventions that have quite localised impacts, but they make a real difference to residents’ daily lives.

“The policy of small steps achieved remarkable results, since the sum of these small-scale measures went beyond localised impact, taking on a network quality,” explained Eva Kail, the head of Vienna’s coordination office, and Elisabeth Irshcik of the city’s urban design and architecture department in a 2007 article for the German Urban Studies Journal.

“Politicians like them and journalists like them,” Kail tells me. “Because you can go there and see them, you can take photos, you can have opening ceremonies. And you can evaluate them and take the positive experiences and try to transfer it to the mainstream.”

Crucially, data gathered by Vienna’s planners revealed a stark contrast in the proportion of genders who were pedestrians and those who were car users, with women making up a far higher proportion of the former, and men the latter. A large number of gender mainstreaming projects have thus focused on improving the pedestrian environment, including widening pavements, introducing new pedestrian crossings, installing a public lift, and redesigning two public squares.

A shift towards a more walkable city may not seem revolutionary now, Vienna was ahead of the curve. Elsewhere, the recent move towards more walkable places has primarily been driven by the climate change agenda, however. As such, it’s not necessarily addressing some of the key issues that disproportionately affect women in city streets.

For example, an absence of gender sensitivity can mean that new tree planting - attractive as it is - blocks out street lighting and makes streets feel less safe at night. Gender mainstreaming and planning for climate change are not incompatible, but consideration of a range of issues together is required to ensure the best outcome for all.

Navigating the political environment is one of the challenges that planners face when it comes to implementing new ideas. In Vienna, the goal of delivering a gender equal city was aided by a unique combination: not only did the city have a dedicated Department for Women’s Affairs, but its head was an urban planner, Eva Kail. Kail then went on to head up the new women’s urban planning unit and brought with her an established rapport with influential politicians.

Even so, gender equality was always going to take time to become a mainstream matter within civic institutions and, as such, its progress is contingent on its remaining a political priority for long enough to become the norm.

Unfortunately, as I discovered during my research trip to the city in October 2019, a refocusing of political priorities has reduced funding for the women’s planning office. The result is both a limiting of the city’s capacity to support gender sensitive planning and, as planners move on or retire, an increased risk of losing institutional knowledge.

“In Vienna, when we started the gender planning, the Women’s Coordination Office, it was very much the spirit of the times and people wanted to do something new,” explains Kail. “The women’s movement was still active. It was also that the wind of time was blowing in that direction.

“Now I think the wind of time has changed. There are now new topics - it’s children, it’s elderly, it’s diversity, it’s LGBT. So thinking about issues on different levels, that makes it a bit difficult, because I’m convinced that you always need a gender lens in all these topics, too.”

Nevertheless, she acknowledges that some of the principles she and her colleagues have introduced have become mainstream, such as introducing more green space per inhabitant and focusing on better pedestrian experiences.

Yet, even while the women’s office was most active there was resistance to its goals. The city’s planners learned to navigate this in a variety of ways. One was to tactically pick projects in districts where they knew they would get most political support; another was to covertly introduce gender sensitive characteristics to the urban environment without labelling them as such.

Adopting covert techniques may feel like a subversion of principle, but Vienna illustrates how a focus on the outcome - a more gender equitable city - might justify the approach. The experience of Viennese planners also demonstrates that quick, low-cost pilots can effectively establish the impacts of new ideas and provide a platform for advocacy for more permanent measures.

Learning from projects was also turned into guidance, which Vienna’s planners kept as simple as possible. Visibility was key, from setting up a specialist unit within the highest level of city government to creating gender sensitive review panels. This ensured that other planners working in the municipality and design teams were aware of how important the issue was.

A fresh approach to planning

The ideas and tools introduced by the planners in Vienna are not revolutionary. What Vienna has shown, however, is that we can adopt a more sensitive way of planning our cities that takes its cue from a people-centred view of space. To succeed, this philosophy needs to be embedded within the institutions responsible for spatial planning and promoted to the organisations that influence the way we develop space. This is a task that requires long-term political support.

In Vienna’s case the focus was specifically on gender, but the same principles can be applied to planning for the needs of all underrepresented groups. The greatest challenge facing planners in all cases is not a lack of ideas or technical capability but resistance to change - even if those who resist are as likely to benefit from the change as anyone else.

What the Vienna approach also shows us is that a strategy of combining ‘softer’ knowledge from more qualitative evidence with quantifiable data (often gathered by small pilots) can provide a persuasive evidence base that can overcome arguments against innovation in the built environment.

The evidence shows that gender sensitive planning creates places that are better for everyone. Can we introduce this into UK planning? UK planning has been battered by cuts, and the loss of skills and resources provides a formidable barrier to new ways of working. With will - political and professional - I believe this barrier can be overcome.