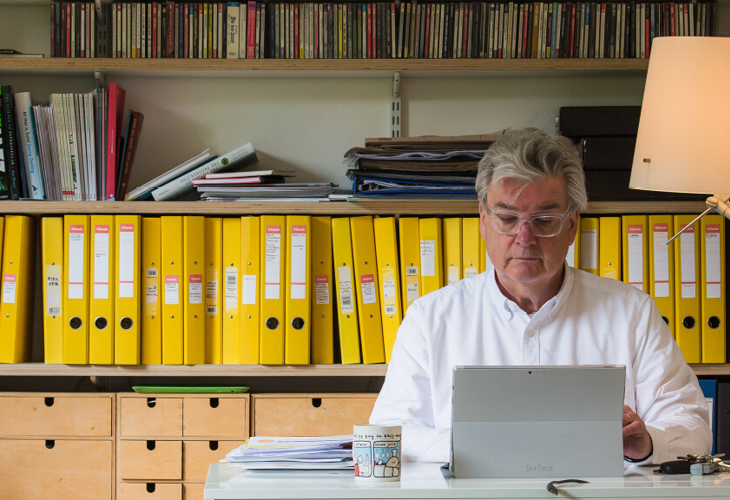 David Taylor: Hi Ben – how are you?

DT: I wondered if I could start – I’ve wondered for a while how the transition is between being a RIBA president and then not is? How has that been for you?

BD: Well, it’s interesting really. It’s slightly like falling off the cliff of RIBA affairs – people have warned me about that beforehand. And it’s certainly true that suddenly you’re in the thick of quite complicated stuff at the RIBA, and then you’re not (laughs). I have to say it hasn’t made a big hole in my life because of two things really. One is that I always intended to go back full-time to the practice. And you know we are very busy and I’m very much enjoying that. But also I took up a new role as a commissioner for Historic England – I always quite like to have something extra-curricular going on, although to say that the RIBA can be handled in that sense would be misleading. It’s very much full-time. So I’m really no longer involved in the RIBA’s affairs whatsoever – I watch as an outsider with interest, and some concern.

DT: Yes, I was going to ask about that. How do you see the situation there at the moment?

BD: Well, I think it’s extremely unfortunate not to have the leadership of a senior member of the profession in the form of the president. I think if ever there was a time where it was necessary for there to be a strong message to encourage the profession towards the future, now would be it. So I think that is very unfortunate timing indeed.

DT: I notice from the efforts you’ve made as a practice vis a vis COVID-19 and 3D printing visors etc and coordinating the professions that, seemingly, architects have sort of another new role within the fight, as it were. Is that something that surprised you? You were a chief instigator, presumably, of some of this?

BD: I was absolutely delighted – one of our senior associates in the Edinburgh office, Richard Foxley, should take entire credit for this. Because he was on it right away, but the breakthrough that he made was to personally join the NHS’ PPE supply committee. It’s because of that that he became thoroughly enmeshed in the whole supply chain question and also was able to obtain the latest and best digital model for us to print, which was really important because each printer is able to create seven headsets a day. We have five of those so it’s a reasonable contribution. But then the important thing was to be able to understand how that all fed into the centralised agglomeration of all the disparate practices’ contributions, of which there are now 50. I suppose what I’m most pleased about is to be part of a practice for whom that’s what you do in a time of crisis. We’ve always seen ourselves as social architects and social responsibility has always been a core value at HTA and it was one of the key things that I kept trying to impress on the RIBA while I was there

DT: Has the pandemic made you think differently about housing in general?

BD: First of all on behalf of the NLA the last Sounding Board that I attended was an incredibly worthwhile round up of various people’s points of view about that question and it gave me plenty of food for thought. I do think that it’s not just about housing; it’s about urbanism and that there are things that we should be doing and should have been doing that other cities are already doing about making space for exercise whilst we’re socially distancing and all that sort of thing, and about making it more possible for local high streets to thrive when people are social distancing by reducing the amount of traffic that passes through them. My local parade at Highbury Barn has narrow pavements on either side and it really should be reduced to one-way working with a single lane in the middle to get people the space that they need and the local commerce a chance to thrive. So there’s stuff that we’re not doing which we should implement. And I do think that crisis accelerates change and we should take advantage of that.

DT: Why do you think there is this logjam then? I mean, you look at Berlin, Paris, Milan – lots of cities around the world are doing this very quickly, reclaiming road space if you like, and seemingly we are a little bit slow.

BD: I’m rather disappointed by one way or another the performance of the Greater London Authority. Failing to establish an effective London Plan is the most extraordinary lacuna for the capital and the economic engine of the UK. How can that possibly have happened? At the NLA I have been fairly critical of that. Obviously there are external factors, and the secretary of state and his inspectors have not made life any easier. But I mean, for goodness sake – this is a nut we’ve got to crack and one can therefore only assume that there is somehow or other in the political divide between the leadership of London and the politics of central government that there is an obstacle to doing the right thing and this is one of them. Or a symptom of the lack of coordination, put it that way.

DT: On your website you talk about having moved from coordinating four studios to now having 200, if you like. How has that been for you as a business and do you have any tips for people who are struggling to either keep their staff motivated and healthy – duty of care and all that – or efficient?

BD: Well, vast amounts of time on either Zoom or Teams for the management. This is not a time when your traditional studio – where the master sketches on detail paper and the acolytes translate. You know, you have to have, in my view, a thorough structure with delegated responsibility for design, and you have to have really regular thorough online reviewing. Actually, it turns out that that’s not the nightmare that you think it is because certainly Microsoft Teams gives you the ability to be able to review work quite well. And we’ve stepped up our focus on design reviewing to sometimes two or three times a week for our management team doing that. So apart from that I think similar online engagement at a team level is really critical. We’re spending a lot of time at HTA supporting each other with mental health first aiders.

DT: What do they do?

BD: There are seven people in our practice of slightly over 200 now who are trained on mental health wellbeing and anybody in the practice who’s feeling stressed let alone depressed is encouraged to call them as first responders. They have a resource to signpost people to other places if need be. But in any event it’s always useful to talk to somebody if things aren’t going well. Although it’s confidential we encourage people to report up if they are struggling and we want them to know that we always are very supportive and give people the time and space to recover or take whatever professional assistance that they need. We are members of the Architects Mental Health Wellbeing circle which the Architects Benevolent Society (ABS) is coordinating, and so on. Because I do think and I’m sure you feel the same that it does you head in! (laughs)

DT: (laughs) It certainly does!

BD: At the end of a day’s lockdown sitting in one place with one screen in front of you even if you have a view – and I have quite an attractive one – it really, really is exhausting. So I think we have to be gentle with each other.

DT: I was reading today that the reason for that exhaustion is because we seek non-verbal cues to provide so much of the information that we compute and when you can’t, that’s why it’s so exhausting.

BD: I totally get that. I wrote a blog on isolation for the Architecture Club which is online on their website and I refer in that particularly to the sense that you have to replace those serendipitous, accidental, instantaneous engagements that happen when you’re working in physical proximity – you know, things grasped off screens, even expressions, quizzical expressions around the table that you can pick up on, they are all vitally important and we all make an enormous amount of use of those kinds of things without being particularly conscious of it. I completely agree and I refer to them in the sense of isolation and even loneliness that you get from not having that kind of social input.

BD: Well I start the day with a reasonably long bike ride with a couple of fairly serious hills to try to get my ageing body working.

BD: (laughs) No, actually – not quite in my brogues, but…

DT: Is this on the Brompton?

BD: No, I’ve got a sit-up-and-beg bike with straight handlebars but it’s got derailleurs and is what I need at my age to get a bit of aerobic exercise. So no, I don’t have a road bike or anything specific like that and I definitely don’t put on the Lycra. But it’s very pleasant. I cycle from here in Highbury to Finsbury Park and do a few laps of the really quite broad perimeter road and then return via the hill on Blackstock Road. Which is pretty steep as well. And my wife and I are making space in the home. We’ve got a west facing terrace which we occupy of an evening from 6.30 to 7.30 generally and heaven be praised we have had THE most wonderful Spring. We relax with a cup of tea most days of the week and then we break our alcoholic fast now on Thursday evening not Fridays.

DT: Yes, Thursday is the new Friday, isn’t it?

BD: Yes, exactly. It’s too much of a stretch to get all the way to the weekend.