The Sky's The Limit 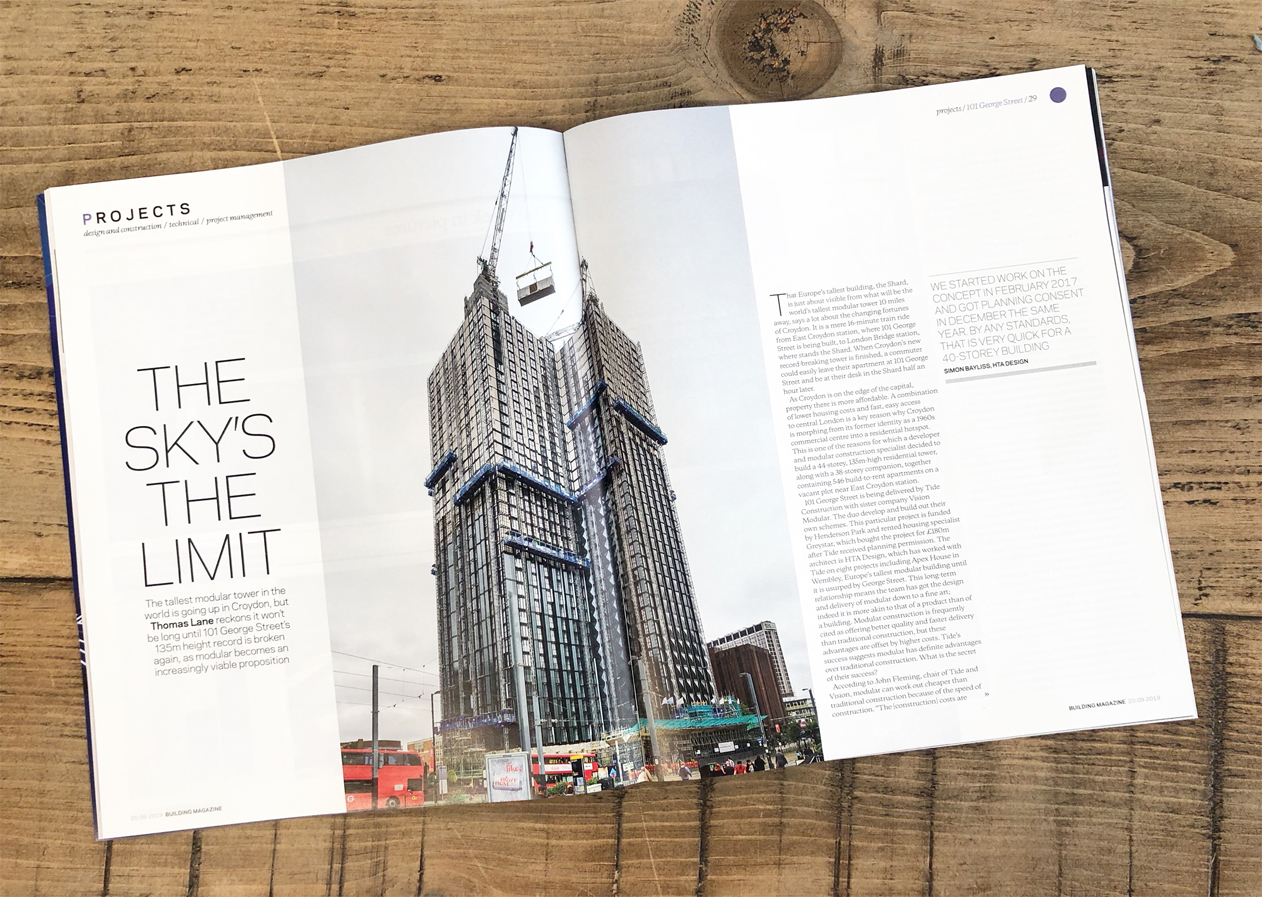 The tallest modular tower in the world is going up in Croydon, but Thomas Lane reckons it won't be long until 101 George Street's 135m height record is broken again, as modular becomes an increasingly viable proposition.

That Europe's tallest building, the shard, is just about visible form what will be the world's tallest modular tower ten miles away, says a lot about the changing fortunes of Croydon. It is a mere sixteen minute train ride from East Croydon station, where 101 George Street, is being built, to London Bridge Station, where stands the shard. When Croydon's new record breaking tower is finished, a commuter could easily leave their apartment at 101 George Street and be at their desk half an hour later.

As Croydon is on the edge of the capital, property there is more affordable. A combination of lower housing costs and fast, easy access to central London is a key reason why Croydon is morphing from it's former identity as a 1960's commercial center into a residential hotspot.

"We started work on the concept in February 2017 and got planning consent in December the same year. By any standards, that is very quick for a 40-storey building" Simon Bayliss, HTA Design

This  is one of the reasons for which developer and modular construction specialist decided to build a 44 storey, 135 meter high residential tower, along with a 38 storey companion, together containing 546 build-to-rent apartment on a vacant plot near East Croydon station.

101 George Street is being delivered by Tide Construction with sister company Vision Modular. The duo develop and build out their own schemes. This particular project is funded by Henderson Park and rented housing specialist Greystar, which bought the project for £180m after Tide received planning permission. The architect is HTA Design, which has worked with Tide on eight projects including Apex House in Wembley, Europe’s tallest modular building until it is usurped by George Street. This long-term relationship means the team has got the design and delivery of modular down to a fine art; indeed it is more akin to that of a product than of a building. Modular construction is frequently cited as offering better quality and faster delivery than traditional construction, but these advantages are offset by higher costs. Tide’s success suggests modular has definite advantages over traditional construction. What is the secret of their success?

According to John Fleming, chair of Tide and Vision, modular can work out cheaper than traditional construction because of the speed of construction. “The [construction] costs are similar but as you are building more quickly the financing savings are quite big,” he explains. “Most buildings end up 10% to 15% more expensive due to changes. I would argue modular is 10% cheaper than conventional construction because of those extra costs and the savings on finance.” Fleming says George Street would take four years to build conventionally but the use of modular construction has cut this by almost half, to 26 months.

"The big problem with modular is continuity of work. One of the things that need to be resolved is planning delays if modular is to become mainstream" John Fleming, Tide and Vision

However, the unpredictable nature of the construction industry can make the modular approach expensive, because manufacturing requires on-going investment in factories and staff. Vision has two factories, one in Merthyr Tydfil with 120 employees and the other in Bedford with 180 employees. Workers are directly employed, so the factory needs certainty of supply to keep these workers busy. If there isn’t enough work the business loses money or has to let the workers go, an option Vision is reluctant to adopt as it takes two years to fully train new workers.

The stop-start nature of some projects is a challenge, and this issue has been exacerbated in recent years by the risks around Brexit. Vision splits its work between its own developments (which account for 70% of workload) and external developers (30%) to spread the risk. However: “It’s easier to manage the process when it is an inhouse development,” says Fleming.

“A third-party developer needs to give certainty of start date.”

The slow and unpredictable nature of the planning process is another major obstacle. “The big problem with modular is continuity of work,” says Fleming. “One of the things that need to be resolved is planning delays if modular is to become mainstream.” Fleming and HTA Design managing partner Simon Bayliss are both full of praise for the “proactive approach” of the Croydon planners, who sped their application through, even suggesting adding four storeys to the building during the process. “We started work on the concept in February 2017 and got planning consent in December the same year. By any standards, that is very quick for a 40-storey building,” beams Bayliss.

The quick turnaround of Tide’s application was helped by being able to put a tried and tested product in front of the planners, demonstrating that work could start on site soon after receiving planning permission. “The planners bought into us because as soon as we got permission we could start digging,” explains Fleming. “We’ve done this with every project that we’ve got permission for.”

Does that mean there is a temptation to prioritise developments in boroughs with efficient planning departments? “There is a huge benefit to getting moving quickly, and some boroughs recognise that,” says Bayliss. “There is a wide spectrum of performance across the London boroughs. We don’t do much in Islington as a result.” This clearly isn’t a deal-breaker; Tide completed a 257-bed student accommodation scheme in Holloway Road last October and received planning permission for a hotel in Finsbury Park at the same time.

When it comes to construction Tide avoids working with third-party main contractors as it considers this to add unnecessary extra risk. “We never work with third-party contractors,” says Fleming. “If there are two different contractors there could be issues with crane availability or logistics and control of the finishes.” With Tide acting as main contractor, it can set up the site to suit modular construction. At George Street the cladding is being installed using mast climbers so the two cranes can be dedicated full-time to lifting modules into position.

Instead Tide works regularly with the same supply chain partners. Modular construction is exacting: for example, the module tolerances are less than 1mm per floor, which means concrete quality and placement must be very accurate. “It is important to get people to buy into modular and have respect for the product,” says Fleming. Regular specialists in the supply chain include Murphy, which does the piling, OBR Construction for the concrete and Century Facades for the cladding. Tide does work with architects other than HTA, but Fleming expresses a preference for HTA as its staff know and understand Tide’s product.

Construction on 101 George Street started in February last year. The first phases are built conventionally with piled foundations, two-storey basements for plant and bicycle storage and a concrete podium linking both towers at ground floor level. This podium is double-height and will be used for communal facilities including a gym, a reception area, a laundry room and meeting rooms. The twin cores were completed using slipform construction in December 2018 prior to module installation, resulting in the rare sight of two tall, very thin cores without any additional superstructure on them. The modules are built in Vision’s factory from standard construction materials. They feature concrete bases, which were selected because this gives greater flexibility on module sizes, creates a rigid platform for transportation and provides good acoustic performance in the finished building. The concrete bases are an important part of the buildings’ stability system, as these are linked together on site.

The module framing material is 60mm square steel sections with heavier-duty sections in the module corners to transfer loads vertically down the building. Internally there is a layer of fire-rated plasterboard over a sheet of Vision’s own fibreboard, with rockwool between the framing sections and the outside clad in cement fibreboard sheets. This build-up has a two-hour fire rating. Externally the building features a 200mm-thick layer of rockwool finished with green glazed terracotta cladding, making the building compliant with the latest building regulations for fire performance.

The team are currently working on level 38, with the cladding team 10 floors behind. The module installation will finish by Christmas and the cladding will be completed by February. The ground floor will be fitted out towards the end of the project, with final completion scheduled for May 2020. According to Fleming, there is potential to go even higher than 135m by using heavier-duty steel framing in the corners of the modules. Given the rapid rise of modular, it won’t be long before this record is surpassed.