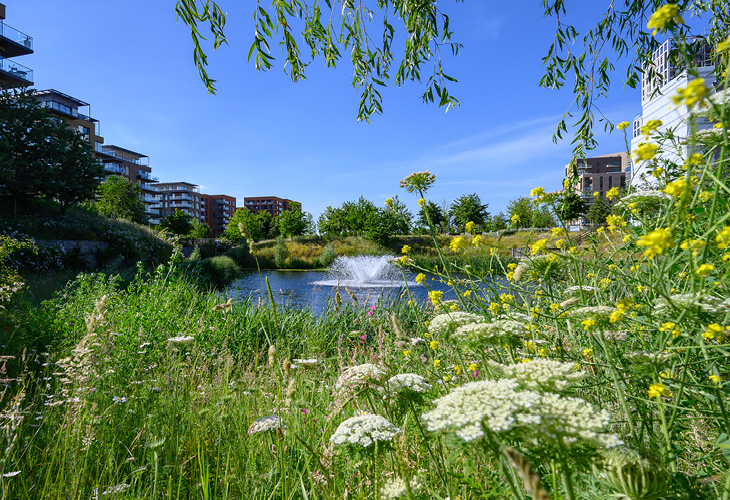 Cator Park has won the Sir David Attenborough Award for Enhancing Biodiversity and The President’s Award in The Landscape Institute Awards.

The Sir David Attenborough Award for Enhancing Biodiversity award celebrates projects which emphasise the enhancement or connectivity of habitats for biodiversity. The ‘President’s Award’ is the most prestigious landscape award given in the UK. Every year, the LI President picks which of the LI Award-winning projects gets the top industry award. And it’s never easy deciding who to crown “the best of the very best”.

HTA’s Landscape team worked across multiple phases of Berkeley Homes’ Kidbrooke Village, delivering C 5000 new homes from planning to delivery on site, including the redesign of the 8ha Cator Park in collaboration with the London Wildlife Trust.

We responded to the brief with a landscape led vision for Cator Park and the wider Kidbrooke Village, proposing a mosaic of varied habitat, topography and biophilic spaces including lakes, WSUD wetlands, meadows, open amenity and wild spaces

Drawing upon the history of a lost river that crossed the site and from where the village takes its name, the Lower Kid Brooke, a new chalk stream creates a palimpsest of the ancient waterway as a dry chalk stream winding its way from the north to the south of the park. The chalk stream forms the backbone of the landscape approach, connecting the existing water bodies with a dry riverbed, acting as a path and inviting the public to discover and interact with the natural environment.