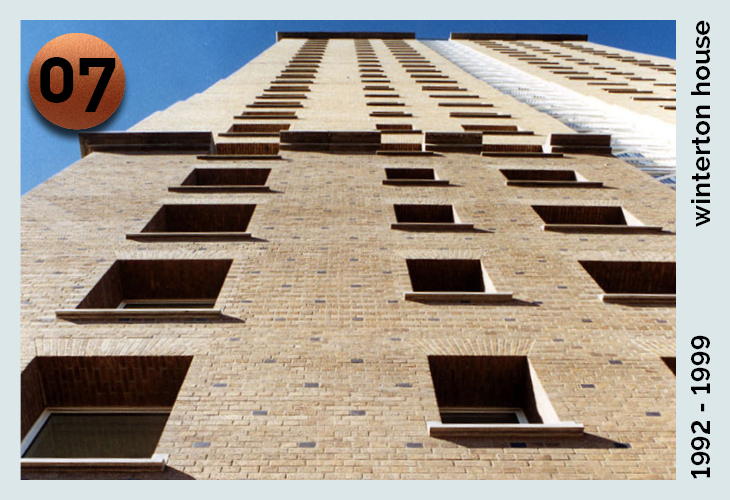 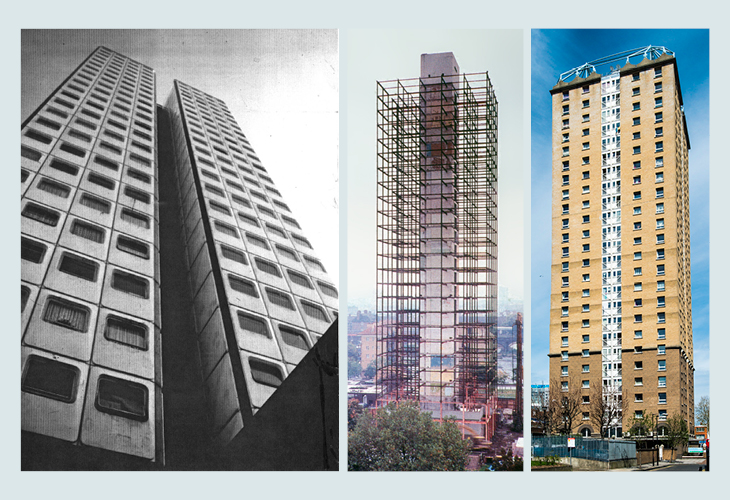 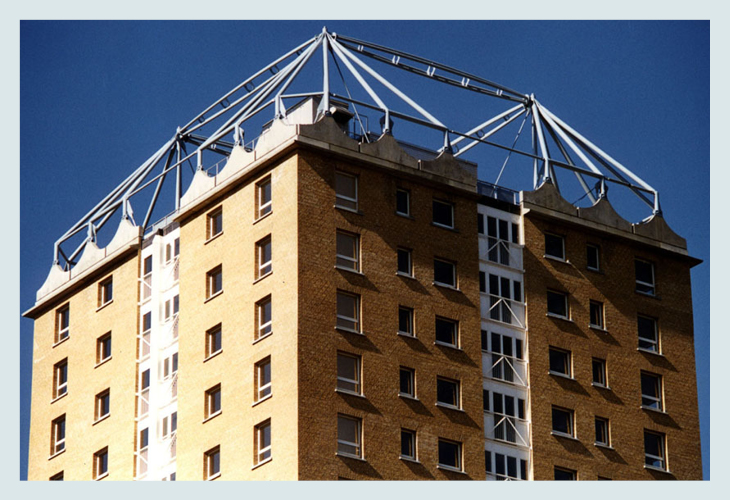 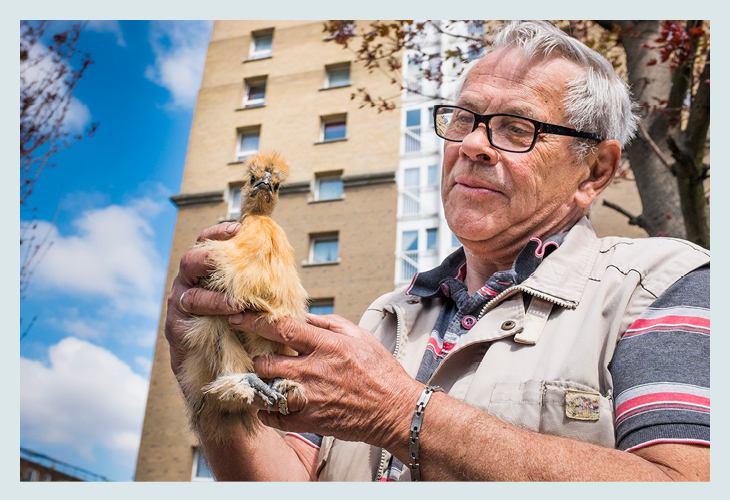 Watney Market Estate in Tower Hamlets was designed by the Architect’s Department of the Greater London Council in the late 1960s. Notable innovations included the 24 storey towers of Gelston Point and Winterton House, constructed of a hot rolled steel frame. Precast floor planks and clad in the SF1 prefabricated panel system developed by the Council. However over succeeding decades technical problems emerged as the panels leaked whilst air in the apartments became contaminated by the sprayed asbestos fire protection of the frame.  Occupants mounted a campaign until in 1992, after a successful application to the Estate Action programme funded by the Department of the Environment made on behalf of Wapping Neighbourhood by Hunt Thompson Associates, funds were secured to repair and make some drastic alterations to the estate.

Much of the alterations to the low-rise blocks of the estate responded to the needs and opinions of residents in a social survey. These included repair and replacement of windows and improved access for shoppers and market traders and better security. Condition surveys of the towers found the flexing of the steel frame caused the asbestos to flake off in the voids behind panels, greatly increasing the risk to health of the residents. The problem was so bad that the proposals included demolition of Gelston Point and the dismantling and re-cladding of Winterton House.

A unique proposal was devised with engineers Whitby Bird, to surround the existing frame with what was to become the tallest unreinforced load bearing brick walls in the world.  Mounted on top of these walls, ‘L’ shaped on plan for stiffness, was a steel structure, using downforce on the brickwork to post-tension the existing frame.

After removal of the asbestos, detachment of the large external cladding panels and demolition of the concrete slabs only the concrete core and external steel frame remained, a most distinctive sculptural object on the London skyline that caught the eye of artist Rachel Whiteread who photographed the exposed structure. Wind bracing and new thicker floor slabs were introduced as the new load bearing brick rose. The four L-shaped sections of the brick cladding are tied back to the main structure through thick Rockwool insulation. The monumental external walls are carefully articulated to give a strong base, four bricks thick, dwindling in thickness according to loading. At the crown is the intricate steel post-tension structure.

The great thickness of brick at the base is visible where pre-fabricated brick arches over windows make the transition from the striped brickwork of the ground storey to the lighter brick of its upper storeys. Those parts of the building nearest pedestrians have the greatest variety and interest in the details. The point of transition from base stage to middle stage considered the full height of the tower determining the level independently of floor level, thus the precast concrete string course intersects the windows of the 7th level above which the lighter brick of the middle stage takes over.

The thermal efficiency of the highly insulated new structure was further enhanced by the provision of a central ventilation and heat recovery system, extracting air from kitchens and bathrooms and pre-heating incoming air via a heat exchanger on the roof of the building.  The latter was originally designed as a spire, which was to have risen through the steel crown to make a yet more distinctive addition to the skyline.  This was dropped, sadly, for cost reasons.

This challenging project followed a simple idea and required an extraordinary attention to detail from the entire project team. It turned an uninspiring system-built tower into an elegant landmark of Tower Hamlets.  Recent interviews with residents reveal that since its refurbishment, Winterton House has proved a popular and successful home for many.